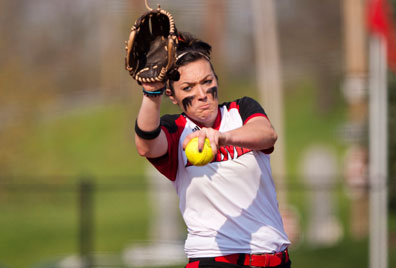 STARKVILLE, Miss. – Senior pitcher Tori Collins of Louisville has been named as the Louisville Slugger Division I National Player of the Week for games played April 9-15.

Collins went 3-0 with a save last week and did not allow a run, earned or otherwise, over 21.0 innings of work. Over four appearances, she allowed just four hits and five walks, while striking out 17. She ended the week with a perfect 0.00 ERA and a .087 opponent’s batting average.

In a mid-week doubleheader with Villanova, the Lafayette, Ind., native pitched a complete game four-hitter in the opener, before returning in the second game to close out the final two innings and earn her third save of the season. In a weekend three-game set with Longwood, the senior notched the first two no-hitters of her career during the first game of a doubleheader on Saturday and the series finale on Sunday.

The Cardinals are currently 38-2 on the year and 8-2 in conference play. This week, Louisville will host a doubleheader with No. 19 USF on Wednesday in a battle for the Big East lead, before traveling to Seton Hall this weekend for a trio of games.

Other Top Performances
UCLA’s Stephany LaRosa helped power the Bruins to series wins over No. 7 Washington and No. 15 Stanford by hitting .571 with 12 RBIs and three home runs… Sara Plourde of Massachusetts tossed back-to-back no-hitters and fanned 25 batters in a doubleheader sweep of George Washington… Hawai‘i’s Makani Duhaylonsod-Kaleimamahu went 7-for-8 with 8 RBIs as the Rainbow Wahine swept a three-game set with Louisiana Tech… Haylie Wagner of Michigan went 2-0 with a save and a 0.00 ERA last week in the Wolverines’ sweep of in-state rival Michigan State… Ball State’s Jennifer Gilbert drove in 10 runs and scored 10 of her own, while hitting .615 at the dish, to help pace the Cardinals to wins over Purdue and Miami (OH).