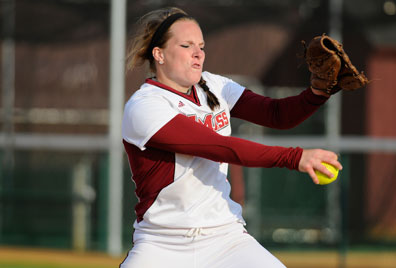 Plourde helped pilot the Minutewomen to their 23rd Atlantic-10 tournament championship last week by going 3-0 and allowing just four earned runs on five hits with nine walks and 33 strikeouts. She ended the week with a 1.33 ERA, 11 strikeouts per seven innings and an unfathomable opponent’s batting average of .075.

In the opening game of the tournament, the Bristol, Conn., native allowed two runs, but struck out 18 in a 5-2 over George Washington. In their next game, Plourde tossed a complete-game shutout against archrival Fordham, while allowing only two hits. The Minutewomen clinched the title against George Washington on Sunday behind a one-hitter from Plourde, who struck out 11 in the win.

The senior also proved she could be equally as effective on the other side of the rubber by batting .571 with a run, two RBIs and a .667 on-base percentage.

Massachusetts will enter this weekend’s regional in Columbia, Mo., at 38-11 overall and on a 22-game win streak. The Minutewomen will begin their road to Oklahoma City on Friday when they face DePaul at 4 p.m. CT.

Other Top Performances
Louisville’s Jordan Trimble helped lead he Cardinals to the BIG EAST tournament title by batting .600 with four extra-base hits, including a walk-off home run in extra innings in the championship against Notre Dame… Chandler Hall of Texas State helped lead the Bobcats to the Southland tournament title by going 2-0 with a 0.50 ERA, including tossing a no-hitter in the title match… Oklahoma’s Lauren Chamberlain batted an even .500 with three home runs and five RBIs in the Sooners’ sweep of Iowa State… Dacia Hale of Louisiana Tech tied the NCAA record for RBIs in a game last week when she drove in 11 versus Fresno State in the WAC tournament… Georgia Tech’s Hope Rush went 3-0 with just four earned runs and a .143 opponent’s batting average as the Yellow Jackets won the ACC tournament.