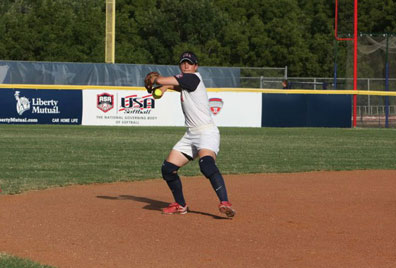 Rookie infielder May-Johnson (Reno, Nev./Iowa assistant coach), who saw time at shortstop and third base, came out of retirement in 2011 to make her first USA Softball Women’s National Team at 27-years-old. She started 27 of 28 games the United States played at the Canadian Open Fast Pitch International Championship in Surrey, B.C., Canada, the World Cup of Softball in Oklahoma City and the Pan American Games in Guadalajara, Mexico. While the red, white and blue finished second in Canada, where May-Johnson earned the Defensive Most Valuable Player award, the team won a fifth straight World Cup title and seventh consecutive Pan American Games gold medal.

“When you play on a really good team like the USA Softball Women’s National Team, it is easier to play well,” May-Johnson said. “It’s easier to play defense when you are behind a good pitcher who strikes everyone out. It’s easy to hit well when the people before you are on base and when the batters behind you are dangerous. Sometimes when you’re on a really good team, you win these neat awards like the USA Softball Female Athlete of the Year, but I know this award is not all for me. It’s the people around me that I have to thank for helping me perform at this level.”

At the plate, May-Johnson went 33-for-79 for .418 overall, ranking her first on the team in hits and at-bats while placing her third among national team members in batting average. She had four doubles, a triple and a team-high six home runs for a .722 slugging percentage. May-Johnson had a team-high 26 runs scored and a team-high 30 RBI, nine more than her nearest teammate.

Connell (Moultrie, Ga.), a rookie on the Men’s Slow Pitch National team, played in five of the team’s games at the McQuade Sr. Budweiser Charity Softball Tournament in Bismarck, N.D., the Team Cincinnati exhibitions in Cincinnati and exhibitions in Oklahoma City and also played Border Battle III against Canada in Oklahoma City. For the season, he was 29-for-34 (.853) with 25 runs scored and 27 RBI. He also hit 10 home runs in 2011.

“It is a great honor to be named the USA Softball Male Athlete of the Year. When you play softball, you work hard all year but you never expect to receive an award like this,” Connell said. “I was excited just getting selected to be one of the 15-men to play for the USA Softball Men’s Slow Pitch National team this year. To be chosen over the other 14 players, the best of the best in our sport, as the Athlete of the Year is just an honor. I’m very excited and am thankful for this opportunity.”

His best performance came in the team’s opening game of the season against the Gene Were All-Stars, a squad of top players from the Dakotas, at the McQuade tournament. He led the offensive effort going 4-for-4 with five RBI on two doubles and two home runs. In the second game of the tournament, Connell continued his hot streak in going a perfect 6-for-6. During the exhibition games in Cincinnati, he went 8-for-10 with seven runs scored and six RBI.

When the team came to Oklahoma City in July to prepare for Border Battle III, the only internationally televised men’s slow pitch game, Connell once again was an outstanding performer, going 9-for-11 with seven runs scored and 11 RBI in the exhibition action. He was 2-for-3 with two runs scored and three RBI in Team USA’s 25-3 Border Battle victory over the Canadian National Team.

Cordes (Fairfield, Calif./Cal freshman) helped lead the United States to the Gold Medal at the International Softball Federation (ISF) Junior Women’s World Championship, Dec. 6-17, in Cape Town, South Africa. She was the only member of the team to start in all 11 games in Cape Town and one of two athletes to play in all 11 games. While seeing time at shortstop and primarily at third base, she also led Team USA in hits (15), extra base hits (seven), RBI (12) and stolen bases (three).

“It is such a tremendous honor to be named the Athlete of the Year for the USA Softball Junior Women’s National team,” Cordes said. “Words cannot describe how it feels to receive this award. It was a wonderful opportunity to wear USA across my chest the past two years and win two gold medals with such an awesome group of girls, who I love playing with. To be named the athlete of the year, it is a complete surprise. Everyone on the team is amazing, they’re so good, and everyone did their part to help us win the ISF Junior Women’s World Championship. I’m really honored. Thank you to USA Softball for this award and the experience of playing for my country.”

At the plate, Cordes went 15-for-26 (.577) with one of her hits, a fifth inning double, breaking open Japan’s no hitter on Dec. 16. She had a team-high 12 RBI, only six less RBI then all of Team USA’s opponents combined, and 10 runs scored, third most on the team. Cordes hit three doubles, a team-high two triples and a team-high two home runs. Both home runs, a solo blast and a three-run bomb, came in the second inning of Team USA’s Dec. 14 game against Puerto Rico. Her tournament slugging percentage of 1.077 was the highest on the team. She was walked five times, third most on the team, and struck out only one time in the entire tournament. On the base paths, she was 3-for-4, also making her the team leader in stolen bases.