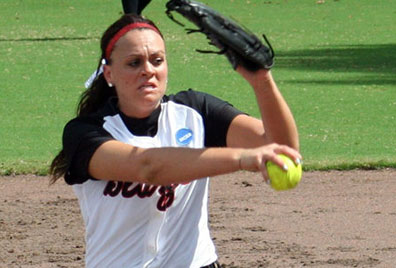 Harasymczuk was nearly unstoppable last week as she went five for seven at the plate with 11 walks, 10 of which were intentional.  She finished the week with 11 RBIs, 10 runs, four home runs, two stolen bases and a double.  Her numbers on the week bordered the absurd with a .714 batting average, a .889 on-base percentage, and a 2.517 slugging percentage.

While given limited opportunities at the plate, the Spring Creek, Nevada native made each one count by going for extra bases with each hit, including four round-trippers.  Harasymczuk was also the hero of game two on Saturday against Western Oregon when she hit a walk-off grand slam to give the Yellowjackets a 13-10 win.

Harasymczuk is currently batting .407 so far this season and leads her team with 13 home runs and 39 RBIs.

Montana State Billings is currently 20-5 overall and 17-3 in the Great Northwest Athletic Conference.  The Yellowjackets will look to keep their 11-game win streak alive this weekend when they travel to Turlock, Calif., for the annual Tournament of Champions.

Hadley was 3-0 with two saves over five appearances for the newly crowned top-ranked Blazers last week.  She finished the week with a 0.66 ERA, 11 hits, 16 strikeouts and just two earned runs and five walks over 21.1 innings of work.  She also limited her opponents to a paltry .148 batting average over the five-game stretch.

Of her five appearances last week, the Dacula, Ga., native went the distance in three of them, while also notching two solo shutouts.  In her 2.1 innings of relief work, Hadley allowed no runs, no walks and just one hit to earn her first two saves of the season.

Valdosta State took over the top spot in this week’s NFCA Division II Top 25 poll, is currently 25-2 on the year and a perfect 12-0 in Gulf South play.  This week, the Blazers will look to defend their ranking when they host a mid-week non-conference doubleheader with Saint Leo and then travel to Christian Brothers and Delta State this weekend for a pair of league doubleheaders.