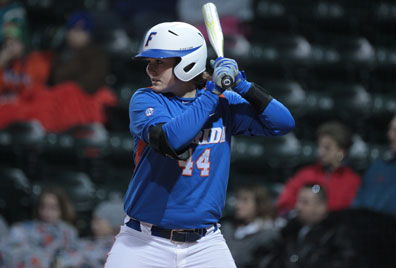 STARKVILLE, Miss. – Junior catcher Brittany Schutte of Florida has been named as the Louisville Slugger Division I National Player of the Week for games played Feb. 13-19.

Schutte helped No. 1 Florida stayed undefeated last week with a mid-week win over Jacksonville and a three-game sweep of Michigan State. For the week, Schutte was 9-for-10 with nine runs, six RBIs, four walks, two home runs, two stolen bases and a double. She ended the four-game stretch with a .900 batting average, a .929 on-base percentage and a 1.600 slugging percentage.

After winning the program’s 700th game on Saturday, the top-ranked Gators will look to stay undefeated this week when they travel to Palm Springs, Calif., for the Cathedral City Classic. While in the “Golden State,” Florida will face off against No. 5 Washington, No. 8 Texas, No. 16 Texas A&M, BYU and Boise State.

Other Top Performances
Louisiana-Lafayette’s Christi Orgeron helped the 17th-ranked Ragin’ Cajuns to a 4-0 week by hitting .615 (17-24) with 15 RBIs, nine runs, four home runs and two grand slams… Mackenzie Oakes of Fresno State went 2-0 on the week, including a no-hitter against Cal State Fullerton, and registered a 0.00 ERA with four strikeouts and a walk… New Mexico’s Shenise Cox homered in every game this week for Lobo’s and ended the five-game span with a .500 average (9-18) and 10 RBIs… Haylie Wagner of Michigan went 2-0 on the week, including a win over then 22nd-ranked Kentucky, not allowing a single run through 14 innings of work and striking out seven in the process… California’s Valerie Arioto went 6-for-7 at the plate with four home runs and a double and notched two shutouts in the circle, while limiting opponents to a .132 average.