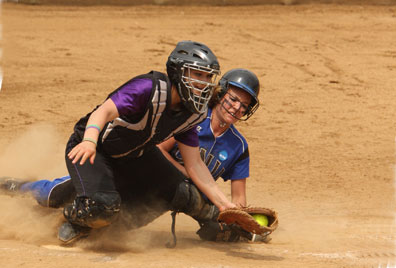 STARKVILLE, Miss. – The National Fastpitch Coaches Association and Diamond Sports, on Friday, announced the 10 student-athletes that have earned the honor of being named as a 2011 Diamond Sports Catcher of the Year.

A committee comprised of head coaches in each of the 10 divisions determines the winner of their respective award.  The winners of the 2011 Diamond Sports Catcher of the Year award are as follows:

Kaylyn Castillo, Arizona State University
Castillo bookended her career with the Sun Devils with a by helping lead them to a second national championship in 2011. The Norco, Calif., native played a major role in the Sun Devils title run by batting .353 with 42 RBIs, 39 runs and 35 walks.  Defensively, Castillo was equally as impressive, as she did not commit a single error behind the plate in nearly 400 chances. She also threw out 9 of 16 base stealers and allowed just two passed balls.

Christine Roser, Rollins College
Roser helped the Tars to a third-consecutive Sunshine State Conference crown this season and a NCAA Regional appearance.  The senior led her team with a .415 batting average, while driving in 48 runs and scoring 56 herself.  She finished the year ranked sixth in the nation in walks per game with 0.86, eighth in on-base percentage at .560 and 15th in runs per game with 1.14.  Behind the plate, the Winter Springs, Fla., native gave up just four errors in 405 chances and threw out eight of 18 base stealers.

Emilee Lepp, Linfield College
Lepp helped guide the Wildcats to a National Championship for the first-time since 2007 this past season, thanks in large part to stellar performances on both sides of the dish. The junior from Colville, Wash., turned in the 11th highest batting average in the nation at .497, while also leading the nation in both home runs and home runs per game with 29 and .054, respectively.  Lepp allowed just one error in 303 chances on the other side of the plate this season, while only allowing four passed balls.

Amy Madden, Southern Nazarene University
Madden played a key role in the Crimson Storm’s breakout 44-16 season by batting .413 with 53 RBIs and 15 home runs, the 18th highest total in the NAIA.   The sophomore from Bethany, Okla., gave up just three errors on 149 chances as the catcher for Southern Nazarene this season.  Madden also threw out two base stealers and allowed only three passed balls over 60 games.

Veronika Fukunishi, Miami Dade College
Fukunishi helped lead the Sharks to a state championship this season by batting .374 with 43 RBIs and a team-high seven home runs.  A two-time Louisville Slugger/NFC All-American, Fukunishi ended her final season at Miami Dade with a perfect 1.000 fielding percentage.  The native of Sao Paulo, Brazil will continue her softball career next season at Martin Methodist.

Jena Malmen, Kirkwood Community College
Malmen had a stand-out freshman campaign with Kirkwood in 2011 and helped lead them to a seventh place finish at this year’s national tournament. The Orion, Ill., native hit .398 for the Eagles this season while driving in the nation’s fifth highest total of runs at 74 and leading the nation in home runs with 28.  The Indiana signee also turned in a .994 fielding percentage after committing just three errors in 533 chances behind the plate.

Andrea Schoephoerster, Anoka Ramsey Community College
Schoephoerster batted an even .500 in a season where the Golden Rams finished as runners-up in both the state and in Region 13A.  The Champlin, Minn., native played a key role in her team's 24-win turnaround in 2011 by finishing fourth in the nation with nine home runs and second in RBIs with 75.  Behind the dish, Schoephoerster allowed just seven errors in 219 chances for a fielding percentage of .968.

Adriana Perez, Antelope Valley College
Perez helped lead the Marauders to their seventh straight Foothills Conference title by batting .500, the sixth highest average in the state.  The Palmdale, Calif., native captured her second-straight Diamond Sports Catcher of the Year award by finishing second in the state in RBIs with 63 and third in the state in hits and home runs with 69 and 17, respectively.  Perez, who will enroll at Texas Tech this fall, ended the season with a .992 fielding percentage by allowing only two errors in 257 chances.

Sarah Mooney, North Mecklenburg High School (N.C.)
Mooney, now a two-time Diamond Sports Catcher of the Year, capped off an amazing prep career by batting a whopping .779 and blasting 19 home runs.  The James Madison commitment helped the Vikings avenge two earlier losses to Lake Norman this season and capture the I-Meck Conference crown.  Behind the plate, Mooney did not allow an error in 272 chances and allowed only two passed balls while throwing out 12 base runners.