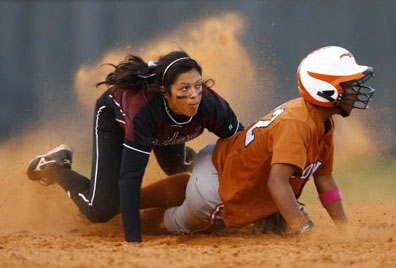 Texas 5A semi-finalist Pearland netted the highest number of total All-Americans this season with three, one on each team, while Ohio Division II runner-up Keystone was the only school with two first-team honorees.

California’s Rodriguez and Arizona’s Canyon del Oro were the only other schools with multiple selections this season, placing two players each on one of the three teams.

In total, 36 of this year’s 48 All-Americans have committed to play softball at the collegiate level, with 31 of those commitments choosing to continue their academic and playing careers at a NCAA Division I institution.

The first of four pitcher’s named to this year’s first team was Lauren Haeger of Deer Valley (Ariz.). Haeger, a Florida commit, led the Skyhawks to the Class 5A-II title by going 26-5 with a 0.45 ERA, including six no-hitters and two perfect games.

Chelsea Wilkinson of Alexander Central (N.C) became a three-time All-American and helped the Cougars to their seventh state title by winning 31 of 33 games and striking out 370 batters. Wilkinson has committed to continue playing softball collegiately at North Carolina State.

Helping Anderson (Calif.) to its first CIF Northern Section Division IV title in over 20 years was pitcher Cheridan Hawkins. Hawkins helped pilot the Cubs to glory by turning in a 0.79 ERA with 510 strikeouts and just 42 walks. She will attend Oregon in the fall.

The final pitcher on this year’s first team was Lindsey Fadnek of Coalfield (Tenn.). Fadnek played a key role in the Yellowjackets postseason run by striking out 403 batters and limiting opponents to a .106 batting average.

The first catcher on this year’s first team was another Florida commit, Cheifland’s (Fla.) Taylore Fuller. Fuller hit .673 for the Indians this season while stealing all 33 bases that she attempted.

The final catcher on the first team was Sarah Mooney of North Mecklenburg (N.C). Mooney, who was also a first-team choice in 2010, hit .779 this year for the Vikings with 19 home runs and 55 RBIs. She will continue her softball career next year at James Madison.

The third and final North Carolinian to earn first-team honors this season was first baseman Robyn Stankek of North Davidson. Stanek, who will attend Mars Hill in the fall, helped take the Knights to back-to-back state title games by turning a .416 batting average and a .987 fielding percentage.

At second base was the first of two first-team honorees for Keystone (Ohio) this season, Alisha Silva. Silva helped take the Wildcats to a second place finish in in the state tournament by hitting .563 with 31 RBIs and 21 stolen bases.

The other Keystone player on the first team this season was utility player Kenzie Conrad, an Akron commit. Conrad went 22-2 in the circle with a 0.98 ERA, while batting .440 at the plate and driving in 39 runs.

The third baseman on the first team was Haley Beam of Pearland (Texas). Beam played a key role in the Oilers run to the 5A state tournament by hitting .437 with 55 RBIs and 19 extra-base hits.

Rounding out the infield on the first team was the last of the three Florida commits, Sami Fagan. Fagan helped lead Dunnellon (Fla.) to the state tournament this season by batting a scorching .693 and stealing 28 bases. This is the third All-American honor for Fagan after being named to the fist team in 2009 and the third team in 2010.

Stokes, now a two-time All-American, tallied 53 hits and 48 runs this season, both of which are new school record for the Hawks. Stokes has committed to continue her playing and academic careers at Nebraska.

Joining Stokes at Nebraska will be Bettiol. Bettiol hit .570 for the Tigers this past season, scored 59 runs and stole 37 bases.

Bonstrom, who was a third-team choice in 2010, slugged an unbelievable 1.109 this season by tallying four triples, nine home runs and 21 doubles. Of her 56 total hits on the year, over half of them went for at least one extra base.

The finial two spots on this year’s first-team were at-large selections that went to a pair of shortstops.

Gracie Goulder of Cactus Shadows (Ariz.) helped her team reach the state quarterfinals this season, due in large part to her hitting. Goulder, who is committed to Georgia, hit .667 for the Falcons, scored 50 runs and drove in an additional 33.