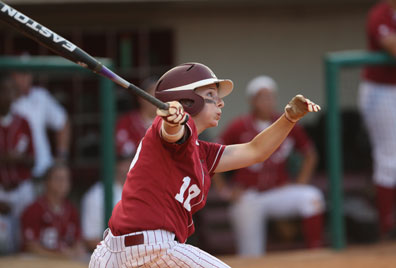 STARKVILLE, Miss. - The National Fastpitch Coaches Association has announced the 2012 NFCA Division I All-Region teams, honoring student-athletes from the Association’s 10 regions. A total of 263 players representing 129 different institutions comprise this season’s regional teams, including first and second teams for each region.

The all-region teams were chosen by NFCA member coaches from each region, and all the honorees will now be eligible for selection to one of three 2012 NFCA Division I All-American teams. In addition, conference pitchers and players of the year not selected to the regional teams were added for All-America consideration.

Just five of the 129 teams that received an award this season had each of their six nominees selected to an all-region team. No. 2 Arizona State, No. 3 Alabama, No. 7 Louisiana-Lafayette, No 12 Oregon and No. 15 UCLA all placed six student-athletes on one of their respective region's two teams.

Alabama was the only team this year to place all six of its nominees on its respective region’s first team. Louisiana-Lafayette and No. 5 Tennessee followed closely behind the Tide with five first-team choices each.

California, the No. 1 overall seed in this weekend's NCAA tournament, also made waves in this year's awards with four first-team selections.

To view all of the 2012 NFCA Division I All-Region teams, click here.