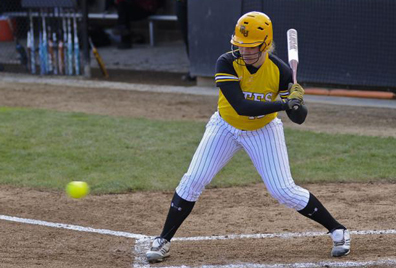 SALEM, Va. - As was the case with all-region selections, parity was the name of the game in Division III softball this season. This was again in evidence as the NFCA named its 2012 NFCA Division III All-American teams Thursday night at the national championship banquet in Salem, Va. Of the eight teams participating in the tournament, seven placed at least one student-athlete on the All-American squad. Championship squads Tufts and Linfield led the way with four nods each, while fellow participant Luther had three. In all, a total of 28 teams across the country claimed one of the 46 spots.

That being said, other than Linfield, only one school (Cortland State, which finished third at the Amherst regional won by Plattsburgh State) placed multiple athletes on the first team all-American squad. Linfield's home run hitting trio of first teamers includes catcher Emilee Lepp, first baseman Staci Doucette, and third baseman Karleigh Prestianni. Lepp and Doucette are Nos. 1 and 3 in home runs in the country and for the third straight year lead a lineup that is No. 1 in the nation in home runs (69). Lepp, who is receiving her third all-American nod, is arguably one of the greatest all-around softball players in Division III history; she holds the Division III career record for runs scored (241) and is second in hits (286), home runs (65) and third in RBIs (248). Lepp's career numbers are bested by only a few, including teammate Doucette, a four-time first-team All-American. Doucette holds the Division III career record for home runs (71) and is second all time in RBIs (256). This season, she leads the nation in home runs with 18 and slugging percentage at 1.000. Prestianni is another three-time all-American as a junior, and is batting .420 with 11 doubles and nine home runs entering the national tournament.

Cortland State's first team combo includes outfielder Meaghan Kohler and utility player Abby Martin. The sophomore outfielder was named SUNYAC player of the year after an impressive power season in which she belted 17 home runs and 12 doubles on her way to a .359 average and 68 RBIs. Martin, a senior double threat, went 12-4 with a 2.58 ERA while batting .393 with 18 doubles and five home runs.

Tufts is making its second national championship appearance in four years, in large part thanks to an outstanding freshman, first-team pitcher Allyson Fournier. The rookie leads the nation in ERA at 0.36 and 12.3 strikeouts per game after going 22-1 and allowing opponents to bat just .119 off of her. Another youngster leading an experienced national championship team is fellow first team pitcher Becca Girvan of Luther. The sophomore Iowa Conference pitcher of the year set the school single season win mark and is third in the nation with 29 wins. It should be a fun-to-watch tournament for fans of great pitching, as Montclair State heads into Salem with a young gun of its own in first-team at-large nod Alex Hill. The sophomore was the NJAC Player and Pitcher of the Year and is third in the nation in strikeouts with 303 and fourth in the nation in ERA at 0.93.

Also leading her team into Salem will be first-team designated player Kaaren Hatlen of Pacific Lutheran. The Lutes are making their second championship appearance in school history but first since 2002, largely thanks to the hitting of Hatlen. She is currently batting .442 with 10 home runs and 55 RBIs and is also the team's No. 2 pitcher after going 13-4.

Wrapping up the first-team infield are Wisconsin, River Falls second baseman Hayley Buchanan and Western Connecticut shortstop Danielle Basciano. Buchanan, a junior first-team all-WIAC nod, batted .378 with 62 hits and 12 doubles, but more impressively committed just one error in 186 chances for a .995 fielding percentage. For Basciano, this is her second All-American nod after batting .454, including 59 hits, 10 doubles and six triples. She was also a threat on the bases, stealing 23 of 25.

The multiple All-American award trend continues with Redlands' Amanda Lievanos in an outfield spot and Eastern Connecticut's Molly Rathbun as an at-large nod. This is Lievanos' second first-team honor as a sophomore, after a season in which she batted .493 with 16 doubles and 13 home runs. The senior pitcher is a four-time All-American and was a game away from leading her team to its third national championship appearance in her career. Her record-shattering career included 33 wins this season and a season-record 339 strikeouts, including two no-hitters and a perfect game against national tournament participant Tufts this season.

The first-team outfield is completed by Ali Hart, Williams' first first-team All-American in school history. The NESCAC player of the year led the conference with a .540 average and set six single-season school records, including 49 runs scored, 74 hits 14 doubles and 22 stolen bases.

Rounding out the first team is Coast Guard designated player Holli Bastinck, who received the final at-large award. The junior helped lead Coast Guard to its third straight NEWMAC tournament championship after leading the conference with a .452 average and 70 hits. She was tied for the lead in home runs with 10 and RBIs with 50.