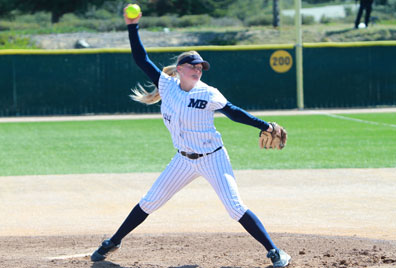 STARKVILLE, Miss. – Forty-five players from 31 different institutions have been selected to one of three 2012 NFCA Division II All-American teams, the association announced on Wednesday.

Two of the three pitchers named to this year’s first team will be on display this week in Louisville, as Alanna Hadley of Valdosta State and Samantha Derr of Kutztown both received the honor. Hadley will head into the national tournament with a record of 29-3, a 0.90 ERA and 154 strikeouts, while Derr will enter the competition at 28-3 to go along with 96 strikeouts and the nation’s second-lowest ERA at 0.69.

The other pitcher named to this year’s first team was Indianapolis’ Jennifer DeMotte. DeMotte helped lead the Greyhounds to a regional appearance this season by leading the nation in victories with 35 and posting a .167 opponent’s batting average. The second of two Greyhounds making the first team this season was outfielder Casey Williamson. Williamson kicked off her collegiate career with a team-high batting average of .455 to go along with 55 RBIs, 39 walks and 60 runs, all of which were also team-highs.

Central Oklahoma’s Nathalie Timmermans and Bloomsburg’s Sam Pientack earned the two nods at catcher on this year’s first team. Timmermans led the nation this season in home runs per game at 0.46 and runs per game at 1.42, while finishing second in slugging percentage with .947 and third in total home runs with 22. Pientack also head a breakout season for her team, leading the Huskies with a .428 batting average and using 34 extra-base hits, including 20 long balls, to drive in 60 runs.

Leading this year’s first-team infielders was first baseman Stephanie Needham of Alabama-Huntsville. Needham led the Chargers this season with a .468 average, 67 RBIs and 19 home runs. Also making the first team for Alabama-Huntsville at the utility/non-pitcher position was Mary Kelley. The now, two-time first-ream selection split time at catcher and outfielder in 2012 and finished the year with a .394 average, 52 RBIs and a perfect 1.000 fielding percentage over 145 total chances.

At second base this season was another two-time first-team All-American, April Jowers of Armstrong. Jowers led the nation in batting average this season at .565 to go along with 50 runs and 28 stolen bases.

Elsamartina Apo of Angelo State was this year’s first-team choice at third base. Apo helped lead the Rambelles back to the super regionals by drawing 40 walks, driving in 52 runs and batting a team-high .424.

The first of two Cal State Monterey Bay players to be picked to the first team this season was shortstop Jackie Serna. Serna played in all 60 games for the Otters and tuned in a .414 clip with 65 RBIs, 26 extra base hits and just five errors. The other Otter on the first team was Cori Reinhardt at the utility/pitcher position. Reinhardt led Monterey Bay in both batting average and ERA at .462 and 1.76, respectively. She also notched 104 strikeouts in the circle and drove in 39 runs from the dish.

The final infielder on this year’s first team was West Virginia State’s Brittany Hyatt, who earned her way on to the list as an at-large selection. The first All-American in Yellow Jacket softball history, Hyatt finished the season with a .446 average, 11 home runs and 61 RBIs.

The remaining two outfielders on this year’s first team were Hannah Rapoport of Colorado Christian and Whitney Okvist of Georgia College. Rapoport helped lead the Cougars to an NCAA regional in their first season of competition by turning in the nation’s 15th highest batting average at .459, while also tallying 34 RBIs, 15 doubles and 20 stolen bases. Okvist also knows something about stolen bases, as she went a perfect 52 for 52 on the base paths this season. The sophomore also led her team with a .413 batting average, while scoring 54 runs on 66 hits.

Rounding out this year’s NFCA Division II First Team All-Americans was designated player Courtney Maihi of Colorado Mesa. The New Zealand-native played a key role in leading the Mavericks back to an NCAA regional by batting .444 to go along with a .859 slugging percentage and a .534 on-base percentage.