Chicago Convention lives up to the hype 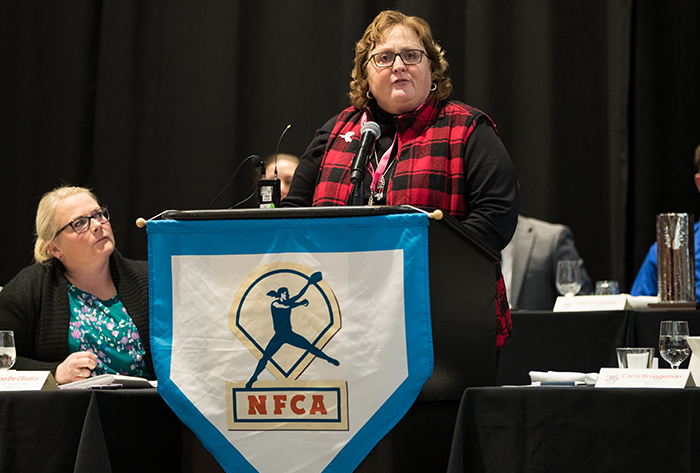 CHICAGO – A rousing keynote, stellar speaking lineup, sold-out Exhibit Show and touching Hall of Fame speeches were just a few of many highlights that made the 2018 NFCA National Convention another success.

A near-record 1,679 attendees (second straight with over 1,600) gathered for four days of learning, sharing, networking and socializing at the Sheraton Grand Chicago. It was the first Convention outside of Las Vegas to surpass the 1,600 mark, breaking New Orleans’ record of 1,594, and was just eight shy of last year’s record-breaking event held at Bally’s Las Vegas.

The Exhibit Show, which sold out in a record 3 1/2 hours, was at full capacity for a third straight year and the Rookie Orientation was well attended, welcoming newcomers and acclimating them to their first Convention. The silent auction, which coincides with the Exhibit Show went digital this year and was an instant success, as it drove attendees to company’s booths to scan QR codes and meet with those company’s representatives.

Additionally, the high school and travel ball coaches, along with softball instructors were treated to a brand new “Meet and Mingle,” which allowed our grassroots coaches to network amongst their peers.

"What an outstanding event!” said NFCA Executive Director Carol Bruggeman. “We like to promote our Convention as the Greatest Softball Show on Earth and I believed it lived up to the hype! The energy and excitement level was at an all-time high.”

In the week’s marquee event, the Association welcomed three new members to its Hall of Fame. Salisbury’s Margie Knight, the late Mike Lambros of North Davidson High School, and Tennessee’s Karen Weekly were inducted as the 28th Hall of Fame Class. Sharon Lambros, wife of Mike Lambros, accepted on his behalf. He is the first high school member and the first posthumous induction into the Hall of Fame.

Keynote speaker Holly Rowe knocked it out of the ballpark on Wednesday evening. Nobody moved a muscle during Rowe’s emotional and passionate speech, which touched on being genuine, having a purpose, her love of sports, her career as woman in the sports broadcasting industry and her fight against cancer.

Preceding Thursday’s member caucuses was the “Pregame Chatter” session designed to help inform each other of the hot topics each membership group is discussing, along with NCAA rules and umpiring inquiries.

At the Softball Summit, a trio of Mary Nutter Scholarship winners, Diversity Grant recipient Marco Aragon of Feather River College and the Turface/NFCA Fields of the Year were recognized. In addition, Southern Illinois head coach Jen Sewell received the Donna Newberry “Perseverance Award” and the University of San Diego’s Melissa McElvain was honored as the NFCA’s Humanitarian Award recipient.

In a special tribute, longtime Convention volunteer, Illinois State head coach Melinda Fischer, was presented with a customized bat in honor of the Association’s Distinguished Service Award being named after her for Fischer’s years of selfless service to the NFCA. Following her recognition, ESPN’s Meg Aronowitz was honored as this year’s Distinguished Service Award recipient.

A laid-back setting was also available for coaches to learn with the standing-room and ever-growing Fireside Chats. Those were preceded by the annual mentoring programing, which allowed coaches to gain valuable knowledge from their peers, along with paying it forward by raising money, which goes directly back into the membership.