Board proud of NFCA commitment to service during pandemic 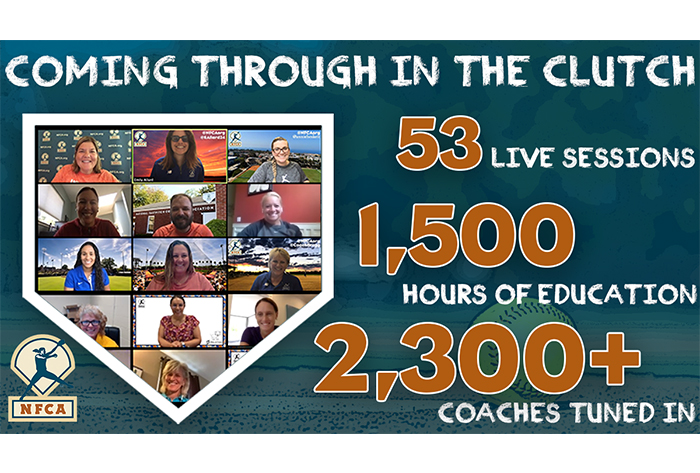 LOUISVILLE, Ky. -- In a normal year, the National Fastpitch Coaches Association (NFCA) would host a variety of youth instructional camps, eight regional Coaches Clinics and softball tournaments, plus an annual National Convention. But 2020 has been anything but a normal year.

In mid-March, most events — including softball — were halted due to the COVID-19 pandemic, and the NFCA joined the rest of the world in adjusting to a new normal.

The NFCA Board of Directors wanted to share how the Association quickly pivoted to an extensive lineup of online learning to help softball coaches weather the COVID-19 pandemic by providing access to educational resources and a continued connection to the fastpitch coaching community. It also provided a place of support for coaches whose spending budgets were frozen, by extending expiring memberships on a case-by-case need basis.

“The NFCA stepped up to provide an opportunity for our community to stay connected, to continue to grow professionally and to help us provide the necessary support for our student-athletes during these unprecedented times,” NFCA Board President Kate Drohan said. “The NFCA’s adaptability to provide these services and resources to our coaches in a timely way — whether it was a podcast, clinic, webinar, or interactive session — was a source of strength for all of us.”

The Association utilized the Zoom video conferencing platform to provide 53 total sessions from March to August, with multiple sessions offered each week. The educational lineup included 28 webinars and coaching conversations, seven Virtual Mentoring Sessions, seven Virtual Coaches Clinics, and four Educate to Elevate forums. There were also eight division-specific forums that allowed that segment of the membership a place to ask questions and talk freely about how recent legislation and changes may affect them.

"Once the softball season shut down, our immediate goals became very clear,” NFCA Executive Director Carol Bruggeman said. “It was not to focus on circumstances, but instead to focus on creating opportunities and building hope.”

“Credit goes to our creative and innovative NFCA team for developing and delivering relevant programming and to our generous coaches for sharing their expertise on our webinars, clinics, and forums. We are proud to serve the softball community."

Topics covered have included everything from keeping players engaged and creative training ideas to financial planning, taking care of your own mental health and communication. The Virtual Mentoring Sessions were an adaptation of the popular annual in-person event at the NFCA Convention, where veteran coaches (mentors) and newer coaches (mentees) assemble in small groups to discuss and share ideas to help both grow and build their networks.

“This was a great decision on the part of the NFCA while we were all put "on hold" with our normal coaching responsibilities,” Ashland University head coach Emlyn Knerem said. “As coaches, we are used to going non-stop throughout our season and into the summer with recruiting. Since that came to a complete halt, it was refreshing to be able to interact with other people who were in the exact same situation as I was.”

All events — with the exception of a nominal $25 fee for the Coaches Clinics — were free to attend for members, and a selection of the offerings, like the Educate to Elevate forums, were also open to the general public.

Even with a small cost to attend, the Virtual Coaches Clinics, each one featuring a trio of presenters who are among the best teachers in the game in everything from hitting and pitching to defense, baserunning and outfield play, were popular, with over 1,200 attendees for those sessions alone.

“The Zoom sessions provided by the NFCA were incredible,” Huntley High (Ill.) head coach Mark Petryniec said. “It was a great opportunity to listen, learn and stay connected during an extremely-challenging time.”

In addition to online education, the NFCA has also kept coaches updated on legislation in their various member divisions via group emails and a dedicated COVID-19 webpage, introduced a scheduling assistant to help coaches fill open dates when they do get back onto the field, and added more than 1,500 hours of digital education to each member’s online Coach’s Box to keep them engaged.

The NFCA has continued to provide its weekly educational video tip on Tuesdays presented by Triple Crown Sports, and “The Dirt” Podcast presented by Netting Professionals on Wednesdays.

“It gave us all the opportunity to stay engaged with softball,” Mansfield University head coach Edith Gallagher said. “It kept the softball community connected in a time when connection was very important.”

Just days before the shutdown of sports, the Association completed its Division III Leadoff Classic on March 8 in Tucson, Ariz., and in February held its Division I Leadoff presented by Rawlings in Clearwater, Fla., its NAIA Leadoff in Columbus, Ga., and the endorsed NFCA Texas High School Leadoff in Bryan and College Station, Texas. But in April, the pandemic forced the cancellation of endorsed High School Leadoffs in Newark, N.J., and Tracy, Calif.

The pandemic also cancelled the NFCA/Ohio Stingrays EXCEL Camp in July, but the Association was able to safely hold its new NFCA Atlanta Legacy EXCEL Camp on July 8 in Georgia, as well as the NFCA Pennsbury Classic Camp in Pennsylvania on Aug. 5. The NFCA Northeast Academic Camp on Aug. 4 was cancelled due to weather.

In December and January, the NFCA held its eight regional Coaches Clinics, which topped 2,500 attendees for the second time in the last three years. The Association is currently weighing whether it will be able to safely hold those annual events in person — beginning with the Chicago I Coaches Clinic on Dec. 4-5 — this winter.

Most recently, the ongoing pandemic forced the NFCA to move to an all-virtual Convention this December, with continued travel restrictions and concerns for member, staff and exhibitor safety all factoring into the decision to not hold its annual gathering in Dallas, Texas, as planned. The Association has reached an agreement with the host hotel to now utilize their property for the 2024 Convention, but will be in the state of Texas before that for its 2022 Convention in San Antonio. The 2021 NFCA Convention is scheduled to be held on Dec. 8-11 in Las Vegas.

While doing all these things, the NFCA, a 501 (c) (3) non-profit corporation, has been dealing with its own financial issues, as new memberships and renewals slowed, several sponsorship companies temporarily closed, and few in-person events could be held while the country has been largely locked down to help slow the spread of the virus.

In reaction to that, and aimed at helping keep things rolling as normal as possible during the pandemic, Bruggeman announced an operational efficiency plan in mid-April — immediately approved by the Board of Directors — where she temporarily agreed to a 25 percent pay cut, salaried employees took a 10 percent cut, and hourly employees had their hours reduced by 10 per week, a practice that has continued into August. In response, members have overwhelmed the Association with their generous donations of financial support.