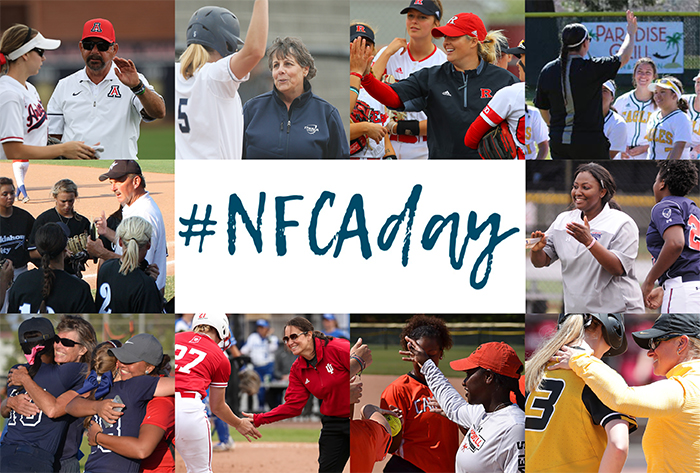 LOUISVILLE, Ky. — The inaugural NFCA Day, saluting softball coaches around the country on April 18, was a rousing success.

Originally planned as an on-field celebration at games played that weekend, including games featured on ESPN’s family of networks, things quickly changed with the cancellation of games due to the shutdown of sports and all other group activities because of the COVID-19 pandemic.

With no on-field action to rely on, the event became an online experience, with support for coaches and the NFCA coming from all corners of the nation on social media. The outpouring of support was almost too much to keep up with on Twitter, as the hashtag #NFCAday dominated feeds both days of the weekend.

A live Twitter chat on April 18 added to the success, with coaches sharing over 300 ideas and thoughts about their “why” as a coach. The NFCA was overwhelmed by the generosity of its members and other supporters of softball who made donations to help assure the Association could maintain the same level of educational offerings during the pandemic.

"NFCA Day was a grand slam!” NFCA Executive Director Carol Bruggeman said. “Our sport is filled with amazing coaches and celebrating them was a real treat.”

“Like any good game plan, when ‘option one’ doesn't work, you quickly switch to ‘option two.’ Repurposing NFCA Day from an on-field event to a social media event was a huge success. The real winners are the student-athletes, as they have the privilege of being coached, inspired, and mentored by talented softball coaches across the country."

With everyone staying at home to help prevent the spread of the virus the past month, the NFCA has found many innovative ways to keep engaged with the membership, including providing multiple webinars and coaching discussions each week, regular news updates via email, and will launch its first Virtual Coaches Clinic on April 24 with Northwestern University head coach Kate Drohan, Oklahoma pitching coach Jen Rocha and Texas A&M hitting coach Craig Snider for just $25.

The NFCA also offered a 50-percent-off discount for new first-time memberships during the NFCA Day weekend, and added 119 new members for the week.

The Association has already started making plans for next year’s NFCA Day on April 17, and is looking forward to celebrating coaches as originally intended and where they are most comfortable — on the softball field.