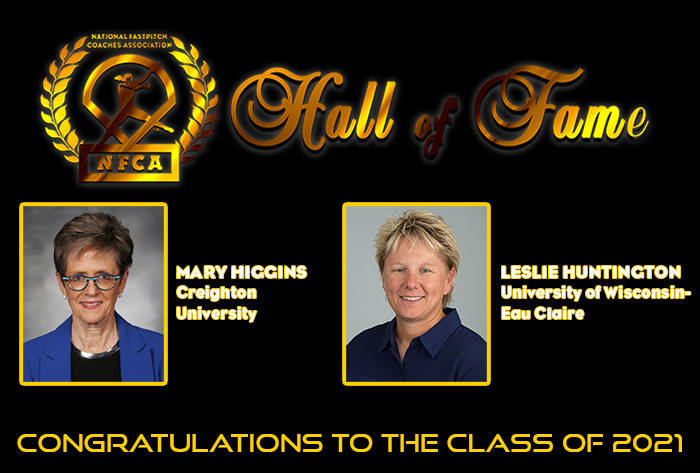 The announcement was made by NFCA Vice President for Awards Pat Conlan at the conclusion of the live Hall of Fame Panel during Friday’s NFCA Virtual Convention. Higgins and Huntington will be inducted during a combined in-person ceremony with the 2020 induction trio of Donna Fields (St. Mary’s University), Kris Herman (Williams College) and Heinz Mueller (Phoenix College) at next year’s NFCA Convention on Dec. 10 in Las Vegas.

Higgins, the first Division I chair of the NCAA Softball Committee, started women’s athletics while still a student at Creighton in 1973, and later served as both softball coach and women’s athletic director, before moving to the academic side of the school during a 39-year career. She was the first woman inducted into the Creighton Athletic Hall of Fame in 1987, having coached the softball team to a 564-298 record and two Association for Intercollegiate Athletics for Women (AIAW) World Series and two NCAA Women’s College World Series over 17 years at the helm. Higgins was also the tournament director for the NCAA Women’s College World Series from 1982-87, and was one of the first members of the NFCA, which was known then as the National Softball Coaches Association. 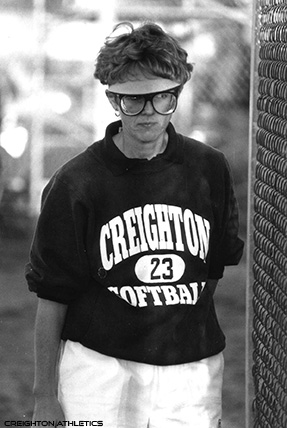 Since 2014, Higgins has served as the president of Omaha Marian High School, a private prep school for young women in Nebraska. She is the first alumna in the school’s history to lead the school.

“I have known Mary for over 40 years,” former player and assistant coach Candi Letts, a current assistant at Stony Brook University, said in nominating Higgins. “She is a mentor to me in my coaching career, as well as life.”

“Mary’s leadership wasn’t always about softball. It was a cultivated philosophy of educating young women, providing information through social interaction, and demanding that each young woman evolves into a better person from the experience they garnered,” Letts said. “Mary instilled in us to fight for our rights to be a voice on our campus, in the sports world, and our everyday life.”

Texas A&M head coach Jo Evans, herself an NFCA Hall of Famer, competed against Higgins early in her stellar career at Colorado State and Utah.

“I was a young coach at the time, and I learned a lot from playing Mary’s teams,” she wrote in a recommendation letter. “She was innovative, willing to take risks, and always had her team prepared. Mary was a coach with integrity and would not back down to pressures to compromise her integrity in any way.”

“Her competitiveness and never-dying charge to make softball a top sport and her devotion to help young women become the best they could set her above others,” Wright said. “I can honestly say I know very few coaches with her kind of service to others.”

Huntington, who is set to coach her 20th season at Wisconsin-Eau Claire in 2021, guided the Blugolds to the NCAA Division III championship in 2008, after a third-place national finish the previous spring. She has compiled a 499-261-2 record over the past 19 seasons. 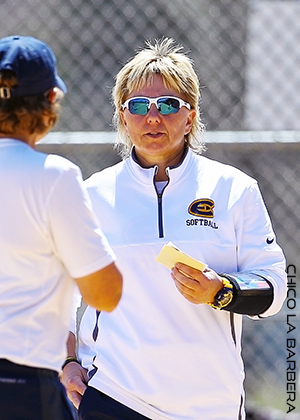 She was a two-time Division III national champion (1997, 1999) and finished third twice (1996, 1998) over a four-year span as the top assistant for NFCA Hall of Famer Henry Christowski at Simpson College.

As a player for NFCA Hall of Famer Marge Willadsen at Buena Vista University, Huntington was a national runner-up in Division III softball in 1992, and also reached the Elite Eight for the Beavers’ women’s basketball team in 1990.

Huntington spent six years as the head athletic trainer at Simpson and worked two years as a certified athletic trainer for the Des Moines Sports Medicine Clinic. In 2000 and 2001, she served as co-head coach of the softball team at Nevada Community Schools, and she currently provides instruction to young players through various local fastpitch programs and her own Blugold Fastpitch Camps and Clinics. She also has her own consulting business, More Than A Game Performance.

“The numbers speak for themselves and prove how Coach Huntington has made UW-Eau Claire Softball a program that is known for excellence on so many levels,” Blugolds assistant athletic director Jill (Janke) Millis, a member of the 2008 national championship team, wrote in a recommendation letter, “but her character, ethics, sportsmanship, integrity and honesty have made her an excellent leader and produced great results not only on the field, but off it.”

“Leslie has served as a mentor for opposing coaches in the league, as well as their fiercest competitor,” associate athletic director, senior woman administrator and Huntington’s longtime Blugolds softball assistant Robin Baker in her nomination. “She puts in long hours each day to develop detailed practice plans, leadership training sessions and mental performance lessons to leave no stone unturned in helping each of her student-athletes become the best version of themselves.”