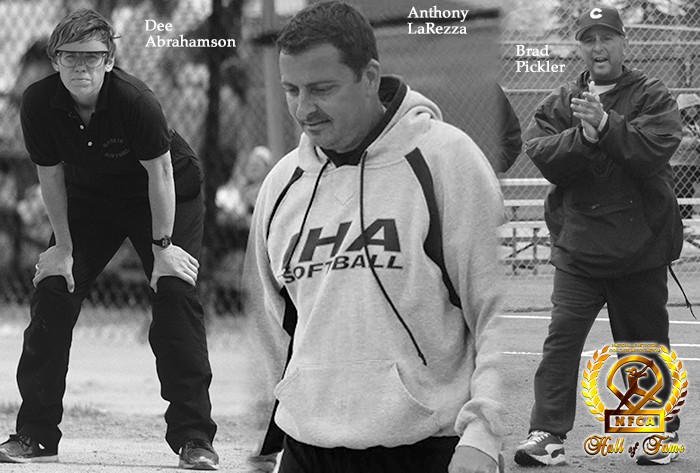 LOUISVILLE, Ky. – One of the NFCA Convention’s marquee events everyone looks forward to is the Hall of Fame banquet. Each year, members are recognized for their accomplishments both on and off the field and contributions to the sport of softball with inductions into the prestigious Hall of Fame.

The Hall of Fame banquet takes place on Friday, Dec. 6 at 7:00 p.m. at the NFCA Convention’s host hotel, Harrah’s Resort Atlantic City. The banquet, which kicks off by honoring Hall of Famers in attendance with a Hall of Fame march, is preceded by a 30-minute social reception.

Abrahamson, who currently serves as an equipment consultant for the NCAA, is being inducted in the Trailblazer category. A 2007 recipient of the NFCA’s Melinda Fischer Distinguished Service Award, Abrahamson began her career at NIU serving as the Huskies’ head softball coach from 1980 to 1994. She steered NIU to a Women’s College World Series berth in 1988, and totaled a Huskie career-record of 416-286-5. Following her coaching career, Abrahamson moved into athletic administration where she oversaw internal affairs units of the NIU athletic department, which included personnel, facilities, events, camps, and clinics, in addition to oversight of several sport teams. She rose from Assistant Athletic Director to Senior Associate Athletic Director and Senior Woman Administrator for NIU.

Prior to NIU, Abrahamson founded the women’s athletic program at Lincoln Trail Community College, where she guided the softball team to 152 wins.

Abrahamson, a 2002 (coach) and 2007 (administrator) Northern Illinois Athletics Hall of Fame inductee, served as the NCAA Softball Secretary-Rules editor from 1996 to 2015 and was a co-author of the original NCAA Softball Rules Book, published in 1997. She is nationally recognized as an expert in softball and bat technology, and also served as the liaison to the National Federation of High Schools and USA Softball.

LaRezza’s Immaculate Heart squad was among the most successful high school programs in the nation under his leadership, with three state championships, numerous county titles and state tournament appearances at the time of his death in February 2016 due to complications from cancer treatment, his second battle with the disease.

Under LaRezza, his 2015 squad went 31-3 to finish ranked 15th nationally in the USA Today Sports/ NFCA High School Super 25 and garnered him and assistant coaches NFCA East Region High School Coaching Staff of the Year. His 2012 team went 32-0 en route to the state championship and the Blue Eagles also won the state crown in 2009.

After one season as coach at nearby Montclair Kimberly Academy, LaRezza returned to Immaculate Heart in 2005, where he had served since 1998 as an assistant to Jeff Horohonich, the winningest coach in Bergen County history. LaRezza himself ranks 20th on the North Jersey coaching wins list with 338 and guided Immaculate Heart to four Bergen County crowns, including three straight from 2011-13.

In addition to being an active member of the NFCA since 2003, LaRezza, a longtime Newark firefighter, was also a seasoned coach and administrator with local travel ball teams, including many years with the NJ Pride. Most recently, LaRezza was the president of the Akadema Elite Fastpitch program. Just nine days before his passing, LaRezza announced on his Twitter account that Immaculate Heart would be playing in a Coaches vs. Cancer event on April 30, with a pledge that the program would donate one dollar to pediatric cancer research for each retweet.

Pickler is entering his 33rd season at the helm of the Cypress College’s softball program. He has compiled over 1,300 career wins and has led the Chargers to a record nine CCCAA State Championships.

Pickler has steered the Chargers to 28 state finals appearances and helped Cypress earn 24 Orange Empire Conference titles. His legacy includes directing the Chargers to a record three consecutive state crowns from 1997-1999 with a combined 177-17 mark. In 2017, Pickler’s squad completed the first ever undefeated State Championship run in CCCAA softball history, finishing the season 48-0.

Pickler arrived at Cypress in 1987 and has turned the Chargers into one of the most successful junior college programs in the United States. He took over a once depleted program and managed to turn it around overnight, earning himself 16 Conference Coach of the Year awards in his first 32 seasons as head coach. Pickler has been featured in Sports Illustrated’sFaces in the Crowd section after guiding the Chargers to a 66-5 record during the 1997 State Championship run.