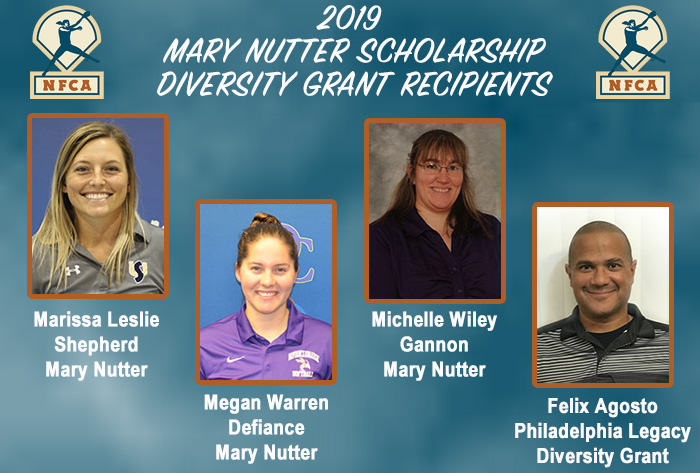 The Diversity Grant is awarded to a minority member coach who shows a commitment to working with minorities, growing the game of fastpitch in their communities and has a need for financial assistance to attend the Convention.

Recipients receive funding to attend the 2019 NFCA National Convention, Dec. 4-7 at Harrah’s Atlantic City, where they can improve their skills at educational seminars and through interaction with their fellow attendees.

Agosto founded Philadelphia Legacy Softball in 2014, a program originally designed as an in-house league for girls from the North Philadelphia area. He expanded the program two years ago to accommodate the number of talented players who could not afford to play elsewhere. Starting as a recreational summer team, the Legacy has transitioned into a tournament/travel team that focuses on college preparation and trains all year long.

“Access and opportunities in sport, in particular, for girls of color from low-income families are still participating at lower rates than those from more affluent backgrounds,” said Agosto. “Our kids are left out and priced out. The sport can save girls of color who are being neglected by the sports world.”

Agosto’s program has made a big difference in access and opportunities. This past summer, 30 girls between the ages of nine and 13 participated with the Legacy, increasing participation by 20 in just one year.

Agosto reached out to the Philadelphia Public and Charter schools to promote the program. In doing so, he received interest from school coaches and athletic directors, with one of those coaches enrolling four of his players. He believes more schools will participate this upcoming year.

Agosto feels that what his program is doing in Philadelphia is special and working. He believes that being able to share the journey will inspire others to do the same, and support from organizations such as the NFCA would go a long way.

In two short years, Leslie has made an impact on the Shepherd softball program. She steered the Rams to a school-record 42 wins, an Atlantic I Regional title, a Super Regional appearance and a final ranking of 19thin the 2019 NFCA Division II Coaches Poll. Just a year prior, in her first season as a collegiate head coach, the Indiana University of Pennsylvania graduate guided the Rams to 34 victories and an NCAA Regional appearance.

“Marissa is bright, energetic and knowledgeable about the game,” said Ashland head coach Emlyn Knerem. “I believe her attendance at the NFCA Convention will allow her to open up her coaching network and meet new mentors as well as take home an incredible amount of insight that will only help her continue the program’s success. Marissa is a coach and an individual who puts others first ALWAYS, is kind-hearted, and has never-ending belief in her athletes. She embodies the character of a coach that many should strive to imitate.”

In January, at the age of 23, Warren took over the reigns of the Defiance softball program, after serving as the program’s graduate assistant for five months. Her first head coaching job saw Warren oversee a program of 26 student-athletes, while juggling the first year of graduate school and hitting the road recruiting. She led the Yellow Jackets to a 21-18 mark and a fourth-place finish (9-7) in the Heartland Collegiate Athletic Conference.

“Although it was one of the greatest challenges I have ever faced in my life, I realized that my entire purpose was to serve my student-athletes and to give them the best experience I could after they dealt with great adversity,” said Warren. “As a young professional, I have a strong desire to learn and grow so I can provide the best opportunities for the student-athletes at Defiance College. I learned so much at the Convention last year and want to continue to take advantage of this great opportunity, to develop myself and improve the well-being of our young athletes playing softball at Defiance College.”

Wiley is entering her second hear as Gannon’s head coach, after serving as the program’s volunteer assistant for eight years. In her first season at the helm, Wiley guided the Knights to a 30-16 mark, a Pennsylvania State Athletic Conference West Division title and a trip to NCAA Division II Regionals.

“Now that I am in my second year as head coach, I am eager to learn how to improve myself and my team to continue to do well and get better,” said Wiley. “I would love the opportunity to meet other coaches and learn from the best to improve all areas of our program. We have had success in the past and I want to keep the tradition going and take our program to the next level.”