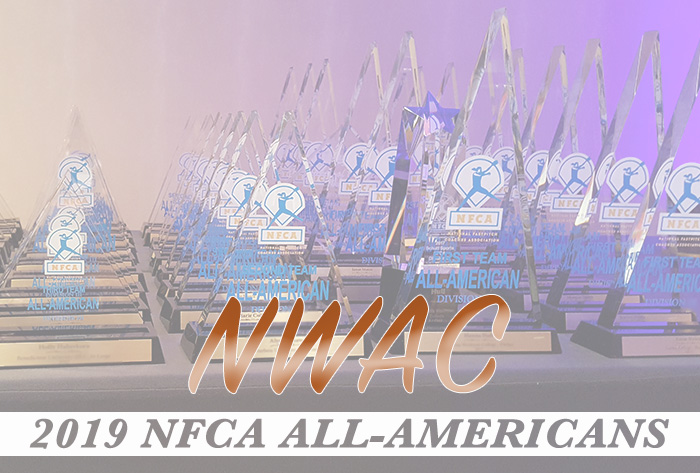 The fifth-ranked Trailblazers’ trio is comprised of infielder Olivia Dean, outfielder Britzy Hockett and utility player Dakota Brooks. Dean is in the running for the batting title, heading into the weekend with a .548 average, two points off the top spot, while her teammate Hockett is fourth with a .533 average. Dean also ranks third in hits (80), third in on-base percentage (.605), fourth in runs scored (71) and fourth in slugging (1.027). Hockett leads the NWAC with 81 hits and is seventh with a .574 on-base percentage. Brooks does it at the plate as well as helping out in the circle. She owns the third-best slugging percentage (1.058) as well as the third-most doubles (21), while also recording 18 homers (6th) and 80 RBI (2nd). Brooks is 20-6 with 136 strikeouts.

Mt. Hood is led by pitcher McKenzie Pierce and infielder Kennedy Jantzi. Pierce has picked up 31 wins on the season, eight more than the next competitor. She is 31-5 with 121 strikeouts. Offensively, she’s batting .438 with 10 doubles, 13 home runs, 49 RBI and 60 runs scored. Jantzi has driven in a NWAC-best 85 runs, owns the second-best slugging percentage at 1.203, third-best batting average at .539 and is also third with 23 dingers.

Edmonds’ two All-Americans are Kaimi-Montira and infielder Ciena Kauhi. The Diamond Catcher of the Year ranks fourth with 22 round trippers and fifth with 78 RBI. She is also fifth with a 1.007 slugging percentage and seventh with 142 total bases. Defensively, she sports a .989 fielding percentage, committing one miscue in 88 chances. Kauhi tops the Tritons with a .477 average, five triples and 74 hits, while adding 10 doubles, 35 RBI and 65 runs scored.

The Golden Shoe recipient Stanfill is tied atop the league with 34 stolen bases. The speedy outfielder was caught just twice all season, while also batting .391 with six doubles, six home runs, 35 RBI and 49 runs scored.