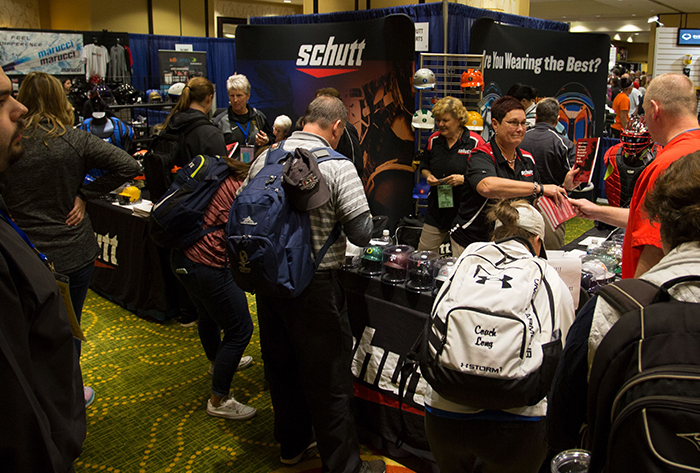 LOUISVILLE, Ky. -The NFCA is pleased to announce that longtime Official Sponsor Schutt Sports will continue its relationship with the Association. The official batter’s helmet of USA Softball signed a multi-year deal and will carry on as the title sponsor for the Association’s Player, Pitcher and Freshmen of the Year awards.

Schutt, which is the largest domestic maker of batters helmets in the USA, remains the title sponsor of the Convention’s Thursday morning breakfast and its presence as an exhibitor at future Convention and Coaches Clinics.

“Working with the NFCA is one of the most rewarding relationships we have, on many different levels,” said Dianne Baker, National Promotions Director for Schutt Sports. “The NFCA has opened the door to many opportunities over the years and we’ve worked very hard with them to help grow the game of softball and their influence in the sport is second-to-none. We’re proud to continue to be one of their partners.”

Behind the collaboration between the NFCA and the Division II Head Coaches Committee, along with Schutt’s generosity, the inaugural Schutt Sports/NFCA Division II Player of the Year was presented to North Georgia’s Courtney Poole in 2015. Since then, the award has expanded to include players from all of the Association’s collegiate divisions, freshmen from NCAA DI, DII & DIII, and pitchers from NCAA DI, DII, DIII and NAIA.

“We are honored to have Schutt Sports renew a multi-year contract with the NFCA,” said Executive Director Carol Bruggeman. “Hall of Fame member Dianne Baker is passionate about the sport and making sure our coaches have the best equipment possible for their respective programs. Our prestigious Player, Pitcher, and Freshman of the Year awards are given to student-athletes who excel at the highest level each year.  As a company, Schutt strives to do the same. Schutt has been a loyal sponsor of the NFCA for many years and we are very appreciative of their continued support.”