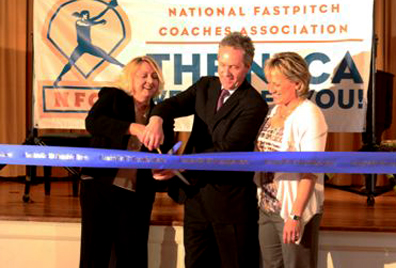 Governor Steve Beshear also announced the relocation in a press release that also mentioned the NFCA’s upcoming purchase of a 10,000-square foot historic landmark building that housed the Crescent Hill Woman’s Club since 1937.

“We’re thrilled to welcome the National Fastpitch Coaches Association to the Commonwealth of Kentucky,” Gov. Beshear said. “This is a national nonprofit organization that could have chosen any city in the country but chose Louisville. Their decision to come here demonstrates how Kentucky’s central location, great transportation options and vibrant workforce make for a winning combination.”

NFCA Executive Director Lacy Lee Baker and NFCA Past President Carol Bruggeman, who is also the associate head coach at the University of Louisville, were on hand to talk about how the decision was made and what the move will mean to the Association.

“The NFCA is excited about moving to Kentucky and joining the Louisville community,” said Baker. “The state and city have a long and extraordinary association with sport, so the relocation of our headquarters to this storied area only makes sense for our future growth.

“With Louisville's central location and outstanding transportation options, competitive cost of living and growing interest in the sport of fastpitch softball, the decision was easy to make, especially when you add in the Kentucky Economic Development Finance Authority's incentives that were approved earlier this year.”

To encourage the investment and job growth in Louisville, the Kentucky Economic Development Finance Authority (KEDFA) preliminarily approved the company for tax incentives up to $240,000 through the Kentucky Business Investment program. The performance-based incentive allows a company to keep a portion of its investment over the term of the agreement through corporate income tax credits and wage assessments by meeting job and investment targets.

“Louisville is quickly becoming a hotspot for sports entities and organized events, so we are very excited and think the National Fastpitch Coaches Association will find a great home in our community,” said Louisville Mayor Greg Fischer.

Also present at the event were two officers of the Crescent Hill Woman’s Club:  Bobbie Tuggle, club president, and Mary Vest, chairman of the Board of Trustees.  The club is closing its doors since, as the ladies say, “times have changed” and membership has dropped considerably since its high of close to 800 members.

“We're very thankful that the Crescent Hill Woman's Club has accepted our offer on the building,” said Baker. “The woman's club has been an integral part of the Louisville landscape since 1917 and over the years has donated more than $1 million dollars to charity.  It will be an honor for us to continue our work in such a place that generated such good deeds throughout the decades.”

Once closing is completed, the space will be renovated for NFCA use, with the NFCA relocating some time in late spring if all goes according to plan.

Here are other quotes from notable area dignitaries: