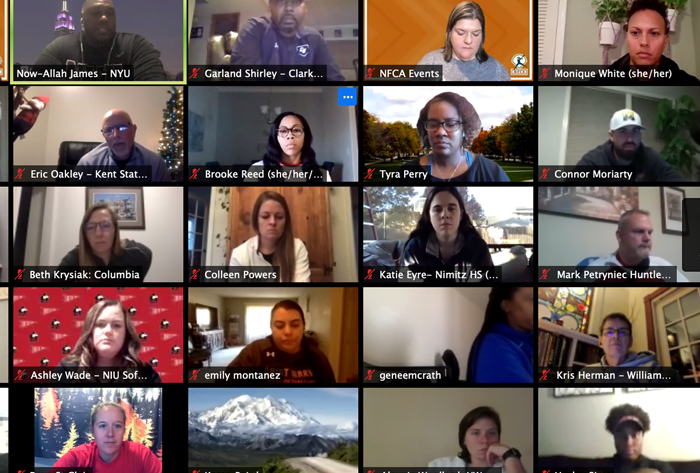 LOUISVILLE, Ky. (Dec. 10, 2020) – Following a highly-anticipated opening day, the second day of the NFCA Virtual Convention was jam-packed with the highest volume (29) of sessions over the course of the three-day event.

During the NFCA Virtual Convention (Dec. 9-11), attendees from around the world have access to over 100 speakers, 70-plus sessions (25 of which will be live) and an Exhibit Show featuring 73 companies. One benefit of the virtual experience is attendees can watch content on their own schedule. Once an on-demand session has begun, it will be available to an attendee at any time. Additionally, select live sessions will be made available on-demand after the Convention has concluded.

Day two featured 15 live sessions, including the all-important divisional caucuses, panels, head coach education and Thursday Night Trivia presented by PGF in the evening. Congratulations to “You Cheated,” which took home first place, defeating 16 other teams in a fun and laughter-filled evening.

Attendees continued to take advantage of the Exhibit Show that ran throughout the first two days of programming and will continue through the final session on Friday. Day two also featured the annual Sports Attack Raffle. One lucky attendee, Isis Hutchinson of St. John’s High School (Texas), went home with a Junior Attack Machine, courtesy of the Sports Attack.

Kicking off the day was an Administrator Panel that combined three NCAA Division I senior-level administrators with two NFCA member head coaches, who also serve as Athletic Directors at their respective NCAA Division III and NJCAA institutions.

In programming geared toward high school and travel ball coaches, a panel of collegiate head coaches offered advice and answered various questions on subjects including recruiting, development and getting involved in the collegiate coaching ranks.

Following those panels, attendees could take in head or assistant coach education, which was followed by live Q&A sessions with the panelists. The final panel of the evening was Diversity and Inclusion. Panelist Amber Barker of Texas Woman’s University made a point that, “It’s OK to not have the answers, but it’s not OK to be silent and ignore the issues going on in the world around us. Have the real conversations.”

Central Washington University head coach Alison Mitchell, who was taking in all the information as an attendee added, "Go to the clubs, programs, offices, etc., that your university has. Seeing what they do first-hand can be powerful. Always do your homework so you can provide your student-athletes with the right information and really show them you're working to be an advocate."

One of the most anticipated sessions on Thursday was a candid conversion with two legends and NFCA Hall of Fame members, Mike Candrea (Arizona) and Carol Hutchins (Michigan). They sat down with NFCA Executive Director Carol Bruggeman and reminisced about their heralded coaching careers and offered advice on a wide-array of topics.

Another conversation led by Bruggeman featured Washington head coach Heather Tarr and four former Huskies that have gone on to have professional and national-team success. Tarr, who is an assistant for USA Softball, was joined by three members of the Canadian National Team – Victoria Hayward, Danielle Lawrie, and Jennifer Salling – and U.S. National Team member Ali Aguilar. All four played roles in their national teams qualifying for the 2020 Tokyo Olympics.

Additionally, Dr. Greg Rose from OnBase U explained how to optimize your hitter’s performance by understanding how they move.

The new Down the Hallway series continued with two more conversations. South Carolina’s Beverly Smith sat down with Naismith Basketball Hall of Famer Dawn Staley, the Gamecocks’ head women’s basketball coach. It was followed by Beth Torina of LSU and NCAA Division I baseball’s winningest active coach, Paul Mainieri. If you enjoyed Coach Torina, then you won’t want to miss her second interview on Friday.

Return tomorrow for more exciting news from the final day of the NFCA Virtual Convention.

*All Virtual Convention attendees will have 30-day access to video content expiring on Jan. 11, 2021. NFCA members who purchased lifetime video access will receive more information the week of December 14th.