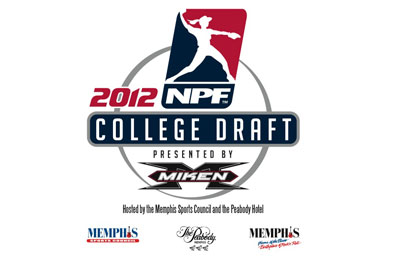 NASHVILLE, Tenn. - National Pro Fastpitch announced final plans today for the 2012 NPF College Draft. The 2012 Draft which is presented by Miken will take place at the Peabody Hotel in Memphis, Tenn., on March 7 at 5 p.m. CST. The Memphis Sports Council is hosting the event in conjunction with the Peabody Hotel.

All four affiliate teams of the NPF will take part in the draft. The draft consists of 20 overall athlete selections that are divided into five rounds consisting of four picks per round. The first overall pick in the 2012 NPF Draft belongs to the USSSA Florida Pride, a position that resulted from a mid-season trade in 2011 with the NPF Diamonds.

The draft can be seen live through the internet broadcast hosted on the League’s website atwww.profastpitch.com

. The internet broadcast will go on air at 4:45 p.m. CST with a preview and introductions and the draft itself will begin at approximately 5 p.m. CST.

GameDay Sports of Memphis is sponsoring several special events for young girls in conjunction with the 2012 NPF Draft. All events will feature NPF players. Leading the way will be an appearance and motivational speech by former Olympic gold and silver medalist and current USSSA Florida Pride player, Natasha Watley. Watley will be featured in an inner-city youth event that will be hosted at the Memphis Redbirds stadium and supported by the Memphis Redbird's RBI program.

For the past two years, the Alabama has garnered the first round draft choice. In 2010 the USSSA Florida Pride chose first baseman Charlotte Morgan of the Crimson Tide and in 2011, the NPF Diamonds made pitcher Kelsi Dunne the number one selection. National Pro Fastpitch has held a draft every year since its inception in 2004.

-Courtesy of the NPF