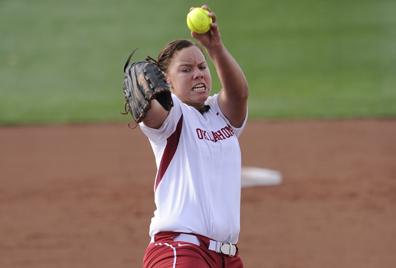 OKLAHOMA CITY, Okla. – Oklahoma and Arizona State combined for eight runs and 17 hits during Saturday’s national semifinal at the Women’s College World Series. In the end, however, Oklahoma was able to pull out the 5-3 win to eliminate the Sun Devils and punch its ticket to the national finals for the first time since 2000.

Arizona State (53-11) wasted little time in getting on the board in the first when Annie Lockwood drove a two-out, two-RBI double to the right center field wall to give the Sun Devils and early 2-0 lead.

The Sooners (53-8) cut the lead in half in the second on a solo home run from Katie Norris that went just over the wall in center field.   The Sooners were not done yet as they tacked on four runs in the bottom of the third to take a commanding 5-2 lead.

In the third, Oklahoma did the majority of its damage with an RBI-single from pitcher Keilani Ricketts and a double from Jessica Shults that drove in Ricketts and Destinee Martinez. The Sooners picked up their final run of the frame off of a dropped fly ball to Arizona State’s Haley Steel that allowed Shults to score.

Arizona State added one run in the fourth on a fielder’s choice from Katelyn Boyd, but that was the only offense the Sun Devils were able to muster for the rest of the game.

In the post-game press conference, Oklahoma head coach Patty Gasso talked about her decision to move Norris up in the line-up, a decision that had direct impact on the game and helped lead to the win.

“Well, Katie has really been swinging well and feeling very confident. And with Erica Sampson in the sixth hole who has a lot of speed and just a feisty style hitter, I think I needed a little more poise and experience to back up Jessica Shults is why I made that decision, and trying to bring Brittany Williams back in the equation, who has had good success in past postseasons. So it's just a risk you take and it worked out pretty good.”

Ricketts, who is now 36-7, turned in her third-straight 10-plus strikeout performance of the WCWS by fanning 13. She now has 40 strikeouts over the three-game-span and is averaging 13.3 strikeouts per seven innings with a 1.00 ERA.

For Arizona State’s Dallas Escobedo her season comes to an end with a record of 24-8. In the contest, she allowed four earned runs off of nine hits with one walk and eight strikeouts over seven innings of work.

The Sooners will now take on the winner of Sunday’s other semifinal between Alabama and California. Monday’s appearance in the WCWS Championship Series will be the first for the Sooners since it was instituted in 2005.