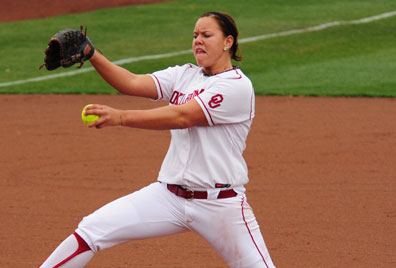 LOS ANGELES, Calif. - Keilani Ricketts, who pitched her University of Oklahoma squad to its first appearance in the Women’s College World Series in seven years, has received the Honda Sports Award for softball. Ricketts’ selection by the Collegiate Women Sports Awards program recognizes her as the country’s top female athlete in her sport.

Ricketts, who was honored as the College Softball Player of the Year, struck out 12 batters to lead the Sooners to a 4-1 victory over the University of Alabama in the opening game of the Women’s College World Series. Alabama then won the next two games to emerge as national champions. Going into the World Series, Oklahoma’s Ricketts was second in the nation in pitching with an ERA of .99, second in hits allowed per seven innings with 3.76, second in total strikeouts with 433, and second in strikeouts per seven innings at 11.

The junior southpaw was a 2011 NFCA first-team All-American and 2010 second-team All-American. She was a member of the U.S. National Team in 2011, when she got the title-clinching save at the World Cup, and has been named to the national squad for 2012. A native of San Jose, Calif., Ricketts was chosen as the 2009 EA Sports/ESPN Rise National Player of the Year while competing for Archbishop Mitty High School. At Oklahoma she is majoring in health and exercise science.

The Honda Sports Award is presented annually to the top women athletes in 12 NCAA-sanctioned sports. As a Honda prize recipient, Ricketts becomes a finalist for the Collegiate Woman Athlete of the Year and the prestigious Honda Cup to be presented this year on June 23, in a live broadcast from the ESPN Studios in Los Angeles. She was chosen by a vote of coaches from 1,000 NCAA member schools. Finalists included Katelyn Boyd of Arizona State University, Jolene Henderson of the University of California, Berkeley, and Jackie Traina of the University of Alabama.