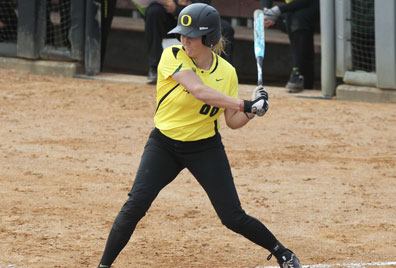 OKLAHOMA CITY, Okla. – Oregon led off its Women’s College World Series elimination game on Saturday with a home run from Samantha Pappas and Tennessee was never able to recover, falling to the Ducks, 2-1.

Pappas took the second pitch of the game from Tennessee’s Ellen Renfroe deep into the stands in center field to give her team the early 1-0 lead. Later in the inning, Kailee Cuico drove the ball down the left field line and plated Kaylan Howard to put Oregon in the driver’s seat with a 2-0 lead.

However, Tennessee (52-14) was able to answer in the second with an RBI-single from Tory Lewis that scored Ashley Andrews, cutting the Lady Vols’ lead in half at 2-1. Despite the run, Oregon (45-17) slammed the door on any comeback attempt in the fourth on a double to left field that scored Christie Nieto and capped the scoring at 3-1.

Jessica Moore improved to 33-14 on the year with win, in which she allowed just one run off of four hits with one walk and four strikeouts over seven complete innings. For Tennessee, Renfroe (27-5) took the loss in her first WCWS start and allowed three hits and two runs with one strikeout over two innings of work.

After the game, Oregon head coach Mike White talked about the game and the Tennessee program.

“We played a very class team in Tennessee. The Weekly’s run a great organization and we knew it'd be a tough game. They had a couple of good pitchers and they've got some players that can really make something happen in a hurry. I thought Jess [Moore] did a great job of neutralizing them when we couldn't turn a couple of double plays, which were big in the context of the game.”

Oregon will return to the ASA Hall of Fame Stadium tonight at 8:30 p.m. CT to take on Pac-12 rival Arizona State in another elimination game. For the Lady Vols their 2012 campaign draws to a close after reaching their fifth WCWS in school history and their second in the past three seasons.