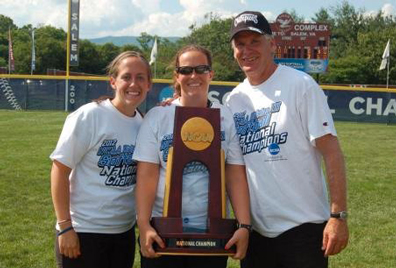 Van Nostrand led the Lutes to their best season in school history, culminating in the program's first-ever NCAA Division III national crown. Pacific Lutheran won a school record 45 games against just 11 losses and won all eight NCAA postseason games en route to the crown. The national title run was punctuated by a 3-0 win over Northwest Conference rival Linfield (46-7) in the championship game. Of Linfield's seven losses, six came against Pacific Lutheran, including two at the national tournament.

Pacific Lutheran wrapped up its berth in NCAA postseason play after winning the Northwest Conference postseason tournament as the No. 2 seed. With the conference championship in hand, the Lutes captured the automatic berth after finishing second by a one-game margin to Linfield in regular season play. This was the first postseason trip for the Lutes in eight seasons.

In just four seasons at PLU, Van Nostrand has amassed a 117-61 record, and a 218-126 overall career record in eight seasons as a head coach.

For their work this season, Van Nostrand and her staff also earned the West Region Coaching Staff of the Year award.