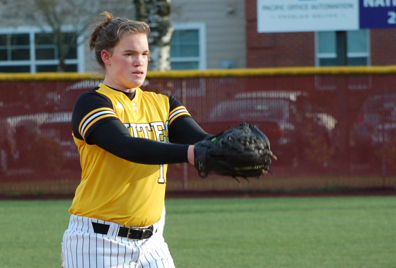 The Woodinville, Wash., native led the Lutes to a 4-0 week, including a doubleheader road sweep over No.1-ranked and previously unbeated Linfield, propelling PLU from unranked all the way to No. 7 in the NFCA Division III Top 25 poll. In those two games, Hatlen was 5-for-7 with three runs scored, four RBIs, and a home run and double in each game. She was also the winning pitcher in the second win, limiting the high-powered Wildcats offense to just five hits and two runs in a complete-game effort.

In another road doubleheader the day before versus Willamette, Hatlen went 2-for-3 with two RBIs, another double and a home run.

For the week, Hatlen was 7-for-10 with three doubles, three homers, six RBIs, seven runs scored, a 1.900 slugging percentage and a .786 on-base percentage. In eight innings of work in the circle, she gave up three earned runs on five hits with a 2.62 ERA. She is leading Pacific Lutheran in most offensive categories for the season, including a .489 average, five home runs and 22 RBIs.

Although the Lutes, 13-5 this season, have the most losses of any team ranked in the Division III Top 25, four of their five defeats came to Division II opponents on a season-opening trip to Hawaii in early February. The last time a Pacific Lutheran softball team earned a national ranking was in the final poll of the 2003 season, when the Lutes were ranked eighth.