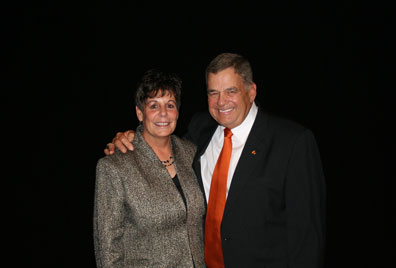 LAS VEGAS, Nev. – Ithaca head coach Deb Pallozzi and Tennessee co-head coach Ralph Weekly became members of one of the most elite groups in all of softball on Friday night at the 2011 NFCA Convention in Las Vegas, the NFCA Hall of Fame.

During Pallozzi’s tenure, Ithaca has made 19 NCAA regional appearances, won 10 consecutive Empire 8 regular-season titles, seven tournament crowns and the 2002 NCAA Division III National Softball Championship.  While at the helm of the Bombers, Pallozzi has coached some of the best players in school history including 14 NSCA and Louisville Slugger/NFCA All-America selections.

Although the awards have not just been limited to her players, as Pallozzi has been the recipient of several awards during her storied career.  She is a five-time Empire 8 Coach of the Year and is a four-time NFCA Regional Coaching Staff of the Year honoree.

Since taking over in Knoxville, Weekly has made the Tennessee softball program synonymous with success, vaulting over the next level to become one of the most elite programs in the nation.  During Weekly’s tenure in Knoxville, the Lady Vols have been to the NCAA tournament eight times, captured two SEC East titles, two SEC tournament championships and have made four trips to the Women’s College World Series.

When at the WCWS under the Weekly, Tennessee has never finished lower than third, including a runner-up finish in 2007.  During his tenure, Weekly has produced 34 Louisville Slugger/NFCA All-Region selections, 21 Louisville Slugger/NFCA All-America selections and 12 Capital One Academic All-America selections.  He is also a three-time NFCA Regional Coaching Staff of the Year winner, a two-time SEC Coach of the Year and has guided the Lady Vols to the SEC tournament in every year of his tenure except his first.

A legend in Cal JC, Eldridge ended a stellar career in 2010 and finished his 32-year tenure at Palomar with a record of 1083-304-6.  Under his guidance, Eldridge led the Comets to 27 conference titles and three state titles.  He has produced 29 All-Americans during his tenure and has been named the California Coach of the Year six times.

In just 17 seasons as the head coach of Oklahoma, Gasso has turned the Sooners into a national power that has made 17 NCAA regional appearances and six trips to Women’s College World Series.  With almost 1,000 career wins at both Oklahoma at Long Beach City, Gasso has won four Big XII regular season-titles, four conference championships and has produced 38 All-Americans.

For a school that is known for its coaching icons, Papa has continued a legacy made famous by names like Smith and Williams.  With over 1,000 career wins, she has created a winning culture at UNC that is rivaled by few.  Under her tutelage, the Tar Heels have had 23 winning seasons, including the last 13 in a row, and have been to the NCAA tournament in nine of the past 11 years.