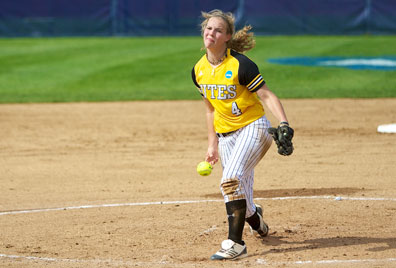 The Collegiate Women Sports Awards Board of Directors will present Hagensen with the Honda Sports Award Division III Player of the Year on June 23 as part of the live broadcast of the Honda Cup announcement from the ESPN Studios in Los Angeles, Calif.

The senior from Bellevue, Wash., held defending national champion Linfield College to three runs in the Lutes’ 3-0 victory. Hagensen received second-team All-American honors from the National Fastpitch Coaches Association this year and is a two-time Northwest Conference Pitcher of the Year.

“I was surprised and very honored when I found out I was selected for this award,” Hagensen said. “The support that my team and I have received from PLU and the surrounding communities has been overwhelming. I thank God for the opportunity I have had to play with great teammates and coaches and am grateful for all that I have learned through my career.”

Hagensen, who majored in math, also served as a student-athlete mentor. In high school she was second-team all-state in 2008.

The Honda Sports Award for Division III Athlete of the Year is presented annually to the top woman athlete in their respective Divisions, chosen from 11 NCAA-sanctioned sports, with each having one nominee derived from coaches’ panels, All-America committees or finish at the respective national championship.   Sports include: basketball, cross country, field hockey, golf, lacrosse, soccer, softball, swimming & diving, tennis, track & field, and volleyball. Hagensen was chosen by a vote of coaches from NCAA member schools.  Finalists included Caroline Stedman of Amherst College for basketball, Chiara Del Piccolo of Williams College for cross country, Lauren Greer of Middlebury College for field hockey, Catherine Wagner of Wisconsin, Eau Claire, for golf, Hannah Church of Gettysburg College for lacrosse, Jaime Orewiler of Wheaton College for soccer, Logan Todhunter of Williams College for swimming and diving, Gabrielle Clark of Emory University for tennis, Nevada Morrison of Wartburg College for track and field, and Rebecca Kamp of Calvin College for volleyball.