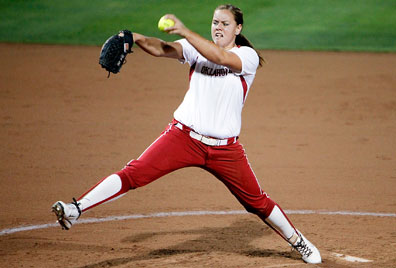 OKLAHOMA CITY, Okla. – Junior pitcher Keilani Ricketts struck out 16 as Oklahoma topped California, 3-0, on Friday to advance to the semi-finals of the Women’s College World Series for the first time since its national title run in 2000.

Ricketts got all three outs of the first, third and fourth innings by way of strikeout and recorded at least one strikeout in each of the other four innings. The 16 strikeouts for Ricketts tied a season-high and was just two shy of the WCWS record for a seven-inning game.

After the game, Oklahoma head coach Patty Gasso talked about the stellar performance of her ace.

“I think Keilani has really gone to another level and just knows how to get locked in like never before and not let things really effect her. I have seen her really step up in clutch situations, when they have runners in scoring position and find a way out of it. She has been doing that all year long, over and over, it is almost like she loves a challenge. Seeing her become truly one of the best is an absolute pleasure to watch.”

While Ricketts turned in a masterful performance, it was the Sooners’ offense that helped clinch the win. The scoring began in third with an RBI double to right center off the bat of Lauren Chamberlain that drove in Georgia Casey to give Oklahoma the early lead

In the fourth, Ricketts helped her own cause by drawing a walk with the bases loaded to bring in Jessica Vest. The Sooners (52-8) capped the scoring at 3-0 in the sixth on a solo blast from Casey that sailed over the wall in left centerfield.

California (57-6) was not without its chances in the game and left six runners stranded, despite only getting two hits off of Ricketts.

With the win, Ricketts improved to 35-7 on the season, while Jolene Henderson took the loss for the Golden Bears to fall to 37-3.

The Sooners will now have Saturday off, as they will wait to see if it will be South Florida, LSU, Alabama or Arizona State that they will meet in the semi-finals on Sunday at Noon CT. For California, they will take on the winner of the elimination game between Tennessee and Oregon on Saturday at 8:30 p.m. CT.