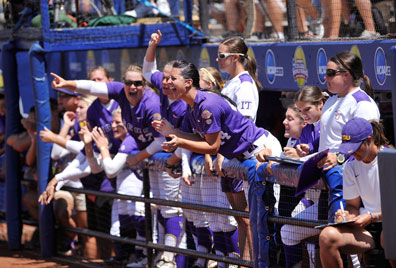 OKLAHOMA CITY, Okla. – A sacrifice fly to the shortstop from Allison Falcon proved to be all the offense LSU needed on Saturday as it eliminated South Florida, 1-0, at the Women’s College World Series in Oklahoma City.

The game was a pitcher’s duel from start to finish with both teams knowing the smallest mistake could make the difference in the contest. LSU’s Brittany Mack (16-12) and South Florida’s Sara Nevins (31-8) each gave up just two hits with Mack allowing four walks and striking out eight and Nevins walking just one and striking out six.

The pivotal moment for the Tigers came in the sixth inning with the bases loaded thanks to two hit batters and an error by USF. With A.J. Andrews on third, Falcon popped up to the shortstop to set the play in motion. Once Falcon was out, Andrews tagged up and headed for home to score the would-be winning run.

After the game, LSU head coach Beth Torina talked about the importance of taking advantage of opportunities like today’s at the WCWS.

“Any one thing, for either team, was going to be the deal breaker in itself. Luckily, we got the break and it fell our way.” She later added, “I think at this point in the year, the team that gets the breaks, is the team that is going to end up victorious.”

LSU is now 40-24 and will take on Arizona State in another elimination game at 6 p.m. CT tonight. With the loss, South Florida’s season comes to an end at 50-14. The 2012 campaign saw the Bulls reach the super regionals for just the second time in school history and they also made their first-ever trip to the WCWS.