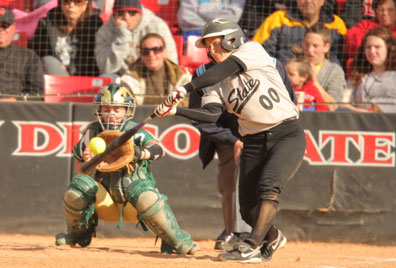 STARKVILLE, Miss. – Sophomore utility player Hayley Miles of San Diego State has been named as the Louisville Slugger Division I National Player of the Week for games played April 16-22.

Miles went 8-for-11 over four games for the Aztecs last week with 10 runs, eight RBIs, seven walks and five home runs. For the week, the sophomore had a .727 batting average, a .842 on-base percentage and a 2.091 slugging percentage.

The Antelope, Calif. helped lead San Diego State to a three-game sweep of Mountain West foe New Mexico last week by hitting multiple home runs in two of the three games and reaching base at least twice in each contest. Miles started the week off by batting 1.000 through a mid-week game with San Diego and the first game of the series with New Mexico. In those two contests, she went 6-for-6 with three doubles, three home runs and three walks.

The Aztecs are currently riding a season-high seven game win-streak, are 25-19 overall and a perfect 6-0 in the Mountain West. Miles and teammates will have a light schedule this week, playing just one game against Cal State Fullerton before finishing their conference slate the following two weekends.

Other Top Performances
Hofstra’s Olivia Galati went 3-0 last week with a save for the Pride while not allowing an earned run and striking out 33 over 21 innings… Christi Orgeron of La.-Lafayette homered in each game with Florida Atlantic, including belting her sixth grand slam of the year to tie the NCAA single-season record… California’s Jolene Henderson piloted the Golden Bears to two wins over then 18th-ranked Oregon by allowing just one earned run and fanning 14… Charlise Castro of Albany used eight hits to drive in 10 runs and score five of her own, helping lead the Saints to a perfect 5-0 week… Texas A&M’s Cassie Tysarczyk helped pace the Aggies to a series win over No. 24 Texas Tech by going 7-for-9 with eight RBIs, a double, a home run and two stolen bases.