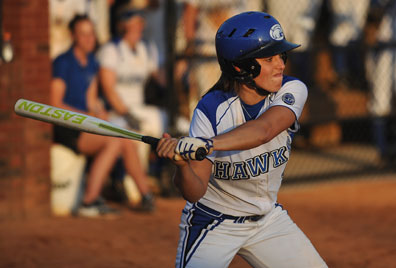 KANSAS CITY, Mo. - After winning its first-ever National Championship, Shorter (Ga.) earned the No. 1 ranking in the NAIA Softball Coaches' Postseason Top 25 Poll, announced by the national office Tuesday. The Lady Hawks notched a 1-0, nine-inning victory over Oklahoma City on May 23 in the 32nd annual national championship to take home the title.

Rattling through the championship event with a perfect 7-0 record, Shorter captured all 20 first-place votes and 560 total points. Head coach Al Thomas took the Lady Hawks to a school-record 53-11 overall mark.

National runner-up Oklahoma City landed at No. 2 with 542 total points. The Stars were vying for their record ninth national title and already own the most postseason wins in history (110). The ranking was the highest for the Stars since 2009.

No. 3 Cal State San Marcos gathered 516 total points. The Cougars have lived in the top three all season long. Brenau (Ga.) was the biggest improvement within the poll moving all the way from No. 16 to 4. The Golden Tigers, who finished with 500 points in the poll, made it to the final three in the national championship. No. 5 Central Baptist (Ark.) recorded 479 points after playing in bracket action at the national tournament.

No. 15 Indiana Southeast and No. 24 Mobile (Ala.) are the newcomers this week. The Grenadiers, who advanced to championship bracket play, is ranked for the first time in school history. Mobile slides back in after a hiatus from the May 8 poll. The Rams had their stretch of 107-straight rankings halted during that ranking.

The poll was voted upon by a panel of head coaches representing each of the conferences /independent /unaffiliated groupings.

Notes: (all information dating back to 2000) The No. 1 ranking is a first for Shorter (Ga.) and the highest in program history - the highest previous ranking had been No. 6 back on April 18, 2007... No. 6 Concordia (Calif.) had been the former No. 1 team for the last six-straight polls... There were 38 different teams ranked in 10 polls this year...  Shorter (Ga.) is one of five programs to hold the No. 1 ranking this year, joining Concordia (Calif.), Lubbock Christian (Texas), Cal State San Marcos and Oregon Tech... Shorter joins Concordia, Cal State San Marcos, former NAIA member California Baptist, Lubbock Christian, Mobile (Ala.), Oklahoma Baptist, Oklahoma City, Oregon Tech, former NAIA member Simon Fraser (B.C.) and Thomas (Ga.) as the only schools to appear at No. 1 since 2000... California Baptist leads the way with 46 all-time No. 1 appearances, followed by Oklahoma City with 20, Simon Fraser with 18, Thomas with 13, Concordia with six , Mobile with five and Lubbock Christian with four... No. 2 Oklahoma City leads all active schools with 81-straight rankings, falling no lower than 18th during that stretch; Lubbock Christian and William Carey (Miss.) are tied for third with 44-consecutive mentions, No. 13 Houston-Victoria (Texas) follows with 39-straight and Concordia is at 35-straight polls.