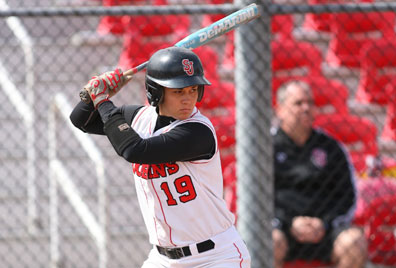 STARKVILLE, Miss. – Senior catcher and third baseman Kacee Cox of St. John’s (N.Y.) has been named as the Louisville Slugger Division I National Player of the Week for games played April 23-29.

The Simi Valley, Calif., native helped pilot the Red Storm to a 5-0 week with two wins over Connecticut and three over Rutgers. The redshirt senior went yard at least once in each game last week and twice in the first game of Wednesday’s doubleheader with Connecticut. In the nightcap against the Huskies, Cox once again came up big and blasted a walk-off shot over the wall in left center to give the Red Storm the win in eight innings.

Cox is currently batting .360 on the season with 24 runs, nine doubles and team-highs of 54 hits, 41 RBIs, 27 walks and 15 home runs. Her 15 long balls this season currently rank her 21st in the nation in that category.

The Red Storm is currently 22-30 overall and 10-9 in the BIG EAST. Its five wins last week helped St. John’s clinch a spot in the BIG EAST Championship for the first time since 2009. The Red Storm will enter the tournament no lower than seventh and could clinch the sixth-seed by taking at least one of three games from No. 9 Louisville this weekend in Queens.

Other Top Performances
Hofstra’s Olivia Galati continued her dominance in the circle with a 4-0 week in which she allowed only six hits and one earned run, while striking out 37… Raven Chavanne of Tennessee was perfect at the plate in three of her four appearances last week, going 10-for-12 with five stolen bases… California’s Jolene Henderson notched two wins and save over then 15th-ranked UCLA by allowing just three earned runs over 16 innings with 19 strikeout and only four walks… Tulsa’s Lacey Middlebrooks helped paced the Golden Hurricane to a 4-0 week by going 7-for-10 at the dish with eight RBIs, three doubles and two home runs…Katelyn Boyd of Arizona State helped power the Sun Devils to a sweep of then 11th-ranked Washington by tallying six hits with two doubles, two home runs and seven RBIs.