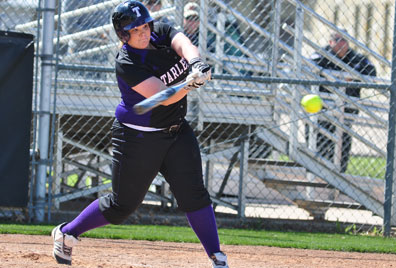 STARKVILLE, Miss. – Senior Katie Welborn of Tarleton State and junior Jennifer DeMotte of Indianapolis have been named as the Louisville Slugger Division II National Player and Pitcher of the Week, respectively, for games played March 12-18.

Wellborn put up big numbers for Tarleton last week, which finds itself just outside of the Top 25 in the latest NFCA Division II rankings. The North Richland Hills, Texas native went 9-for-12 last week with eight RBIs, seven runs, seven walks and five home runs over five games for the Texanns. She finished the week with a .750 batting average, a .842 on-base percentage and an astronomical 2.167 slugging percentage.

The senior catcher/infielder was perfect at the plate in three of five games last week and hit at least one home run in four of the five contests. In fact, she became such an offensive force over the course of the week that she was intentionally walked four times in the series finale with Abilene Christian.

Wellborn currently leads her team with a .429 batting average, a .776 slugging percentage and a .496 on-base percentage. She also currently has 26 RBIS, 20 runs, 15 walks and eight home runs.

DeMotte went a perfect 6-0 last week, as the fourth-ranked Greyhounds pushed their win-streak to 18 games. She finished the week with a 0.90 ERA and 39 strikeouts, while allowing just five earned runs and six walks over 39.0 innings.

The junior from Indianapolis threw three complete game shutouts and one combined shutout on the week, while also posting two 10-plus strikeout performances. Over six games, DeMotte allowed only three extra base hits and limited her opponents to a .183 batting average.

Other Top Performances
Alexa Coffing of Colorado Christian helped the first-year Cougars to their first-ever conference sweep last week by hitting .571 with 16 RBIs and three home runs, including two grand slams… Nova Southeastern’s Sara DeMuth tossed two shutouts, including a no-hitter, over a 3-0 week for the Sharks with just four hits and 22 strikeouts… Danielle Hewett of Stillman helped the Tigers extend their win streak to 16 games by belting four home runs and a triple for a batting average .625 … Valdosta State’s Alanna Hadley went 3-0 for the second-ranked Blazers last week allowing just one earned run and two walks over 18 innings, while fanning 22.