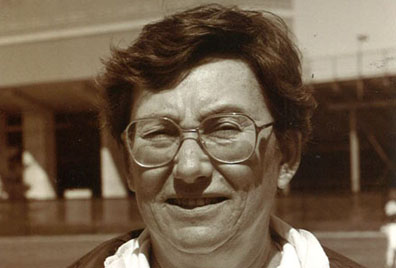 EWING, NJ -- As the head coach of the softball program at Trenton State College, which has since changed its name to The College of New Jersey, Dr. June Walker had a tremendous impact both on the diamond and women’s athletics.

The College will permanently honor Dr. Walker, who directed the Lions for 22 seasons, for her contributions and success by naming the current field in her honor. The final stamp for the naming came in early July when TCNJ’s Board of Trustees approved a resolution adopting the new name at the complex will be Dr. June Walker Field. That complex opened in the spring of 2006. Prior to the naming, the Office of College Advancement secured a $100,000 endowment to ensure Walker’s legacy will have its rightful place with Lions’ softball.

"The attainment of this endowment is a true testimonial to the impact of Coach Walker for more than two decades at TCNJ,” said Interim Vice President for Advancement Peter Manetas, who worked with Walker while serving as the College’s sports information director (1984-91). “To be able to name the field for her in this, the 40th anniversary since the enactment of Title IX legislation is much more than symbolic. Nearly 200 alumnae, colleagues, and friends of Dr. Walker have, in addition, created a fund that will annually provide financial support for the program she nurtured. The 2013 TCNJ softball team will be the first to benefit from the Dr. June Walker Endowment Fund."

Walker was the head coach for 22 seasons, spanning from 1974 until 1995. During that time, she guided the Lions to an eye-popping 721-154 record, capturing five NCAA Division III Championships and added seven second-place finishes. In addition to coaching, Walker also served as Associate Director of Athletics at the College during her tenure.

She was voted Division III Coach of the Year five times during her career and placed the Lions’ softball at the pinnacle of non-athletic scholarship programs. From 1980 until 1995, the College was the only Division III program to earn 16 consecutive national championship tournament berths, while also advancing to the semifinal in each of those seasons (twice under the auspices of the Association of Intercollegiate Athletics for Women and 14 times in NCAA post-season competition), never finishing lower than fourth.

Walker was inducted into the National Softball Coaches Association Hall of Fame in 1992 following her fourth selection as Coach of the Year. She was then honored during the spring of 1994 as the Women’s Sports Foundation Budget Car Coach of the Year. Walker was a frequent speaker at clinics and camps throughout the United States and Europe and served on the board of directors of the NSCA as a founding member. In 1993, she was selected as head coach of the East softball squad at the Olympic Festival in San Antonio, Texas.

In the fall of 1996, she was inducted into TCNJ’s Athletic Alumni Hall of Fame.

The dedication ceremony will take place on “Homecoming Weekend” on Saturday, October 20 at the softball complex at 10 a.m.