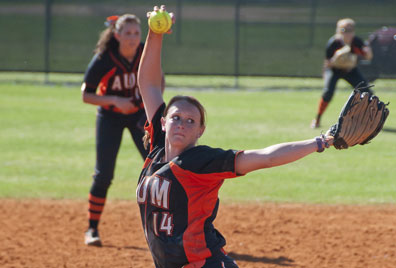 PANAMA CITY BEACH, Fla. – After the first day of play at the 2012 NFCA NAIA Leadoff Classic at Frank Brown Park in Panama City Beach, Fla., only three teams are still left undefeated. Auburn-Montgomery, Central Baptist and William Carey have all completed the pool play phase of the tournament with perfect 3-0 records.

Fourth-ranked Central Baptist got wins over Southern Nazarene, Union (Tenn.) and Madonna on the day. Erica Gunter led the way offensively for the Mustangs on the day by going 8-for-10 with four runs and two RBIs.

Auburn-Montgomery, currently ranked 13th in the NAIA, also picked up three wins on Friday by topping Martin Methodist, Notre Dame (Ohio) and Bellevue. The Warhawk pitching staff combined for three shutouts on the day with 24 total strikeouts and a combined opponent’s batting average of .111.

The final undefeated team left standing at the end of day one was No. 16 William Carey. The Crusaders earned wins over Webber International, No. 21 Columbia (Mo.) and Indiana Southeast. Putting up big numbers at the plate on Friday for William Carey was Hannah Cook-Kelley. The freshman finished the day by going 5-for-8 with six RBIs, two triples and a double.

Pool play in the 2012 NFCA NAIA Leadoff Classic will conclude tomorrow at 9 a.m. CT. Bracket play in the three-day tournament is scheduled to begin at 2 p.m.