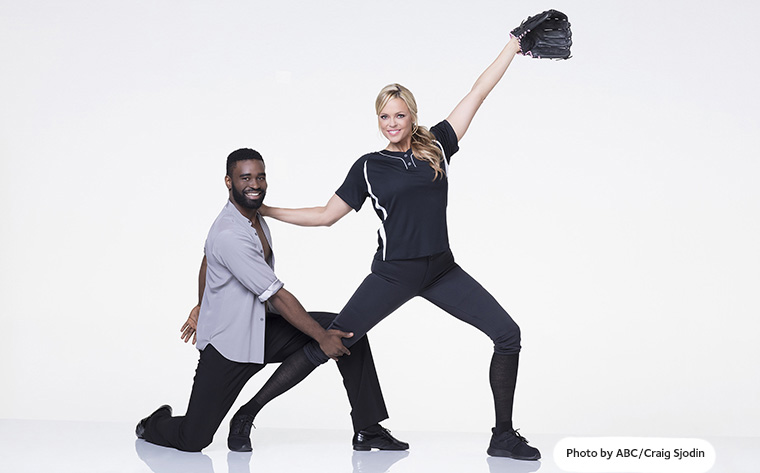 OKLAHOMA CITY – One of the most recognized athletes in the sport of softball, two-time Olympian Jennie Finch will be competing on the upcoming season of Dancing with the Stars, ABC announced today.  Finch joins a cast of nine other athletes, ranging from Olympians to professional athletes, who will compete to win the coveted mirrorball trophy.

Finch was named to the USA Softball Women's National Team in 2001 and competed for the red, white and blue through her retirement in 2010. At the 2004 Olympic Games in Athens, Greece, Finch was 2-0 in the circle en route to a gold medal finish for the U.S. At the 2008 Beijing Olympic Games, Finch compiled another 2-0 performance as the U.S. claimed silver at the sport's last Olympic Games.  In addition to her Olympic accolades, Finch is a four-time World Cup of Softball gold medalist, three-time World Champion and two-time Pan American Games gold medalist as a member of Team USA.

In addition to her career highlights, Finch has also appeared on episodes of Pros vs. Joes, The Real Housewives of Orange County and was a contestant on Celebrity Apprentice in 2008. In 2004, she was named one of People Magazine's "50 Most Beautiful People". Finch is married to former professional baseball player Casey Daigle and the couple have three children – Ace, Diesel, and Paisley. Finch holds Jennie Finch Softball Camps across the U.S. and has a softball academy at Diamond Nation in Flemington, N.J.

Dancing with the Stars, which enters its 26th season, kicks off with each of the 10 athletes being paired up with a pro dancer, then follows their preparation and hard work as they hit the dance floor for the most competitive season ever. Each week these athletes will leave their comfort zones and endure hours of grueling rehearsals to master new dance styles and technical choreography to perform a dance. A panel of ballroom experts will judge the competitive dances and along with viewer votes, those scores will determine who advances in the competition. In the end, only one athlete will rise above the rest to be crowned champion and win the coveted mirrorball trophy.