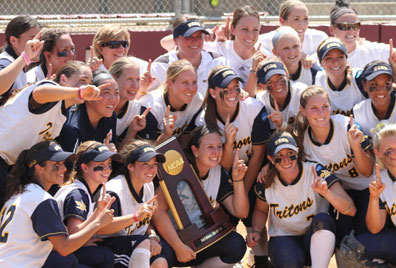 STARKVILLE, Miss. – UC San Diego will begin its defense of its 2011 national title as the No. 1 team in the land, according to the 2012 NFCA Division II Preseason Poll that was released by the Association on Wednesday.

The Tritons (45-13) received all 16 first-place votes and were followed in the poll by last year’s national runner-up Alabama-Huntsville (48-6-1) in second.

Arkansas-Monticello (46-16) had the biggest gain from the final 2011 poll, jumping 12 spots from 24th to 12th, while Cal State Chico followed behind with a 10 spot jump, moving from the “receiving votes” category to 15th.

Teams that did not make the transition from last year’s final poll to the first poll of this season were No. 14 West Alabama, No. 15 Cal State Bernardino, No, 17 Nebraska Omaha and No. 22 Emporia State. Nebraska Omaha is no longer eligible for the NFCA Division II Top 25 poll, having moved to Division I in the off-season.