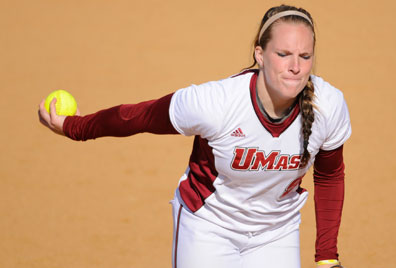 STARKVILLE, Miss. – Senior pitcher Sara Plourde of Massachusetts has been named as the Louisville Slugger Division I National Player of the Week for games played March 26-April 1. The award marks the second time in her career that Pourde has received the honor, having previously been tabbed on April 5 of last season.

Plourde went 3-0 last week including tossing the 12th no-hitter or her career against Quinnipiac. She gave up just two runs on two hits over 19 innings of work last week, while striking out 43 batters. The Bristol, Conn., native recorded double-digit strikeouts in each of her three appearances and finished the week with a 0.73 ERA and a .033 opponent’s batting average.

The two-time Louisville Slugger/NFCA All-American is coming off of a record-breaking week, as she became the Massachusetts and Atlantic-10 all-time strikeout leader. Plourde now has 1,380 strikeouts for her career, breaking the previous record held by Danielle Henderson of 1,353.

Plourde is currently 15-8 this season with a 2.50 ERA and 259 strikeouts, while limiting opponents to a tepid .124 batting average. Her 259 strikeouts this year are currently the most in NCAA Division I.

Currently, the Minutewomen are 16-10 overall and a perfect 4-0 in conference play. This week, Massachusetts will take on Connecticut and Boston College in non-conference mid-week action and will continue Atlantic-10 play on Sunday at St. Bonaventure.

Other Top Performances
Ohio State’s Evelyn Carrillo hit .722 last week with 13 RBIs, two doubles and two home runs including going 11-for-12 in a series against Michigan State … Jackie Traina of Alabama went 4-0 with a save last week in games against then 24th-ranked Auburn and Mississippi State with a 1.50 ERA and 34 strikeouts… Army’s Alexis AuBuchon helped lead the Black Knights to a four-game sweep of Holy Cross by batting .667 and driving in eight runs… Sara Nevins of USF struck out 22, tossed a no-hitter and tallied a 0.66 ERA over a 3-0 week… Coppin State’s Paige Arnold went 3-0 with a 0.00 ERA last week allowing just four hits while tallying 23 strikeouts and no-hitting Maryland-Eastern Shore.