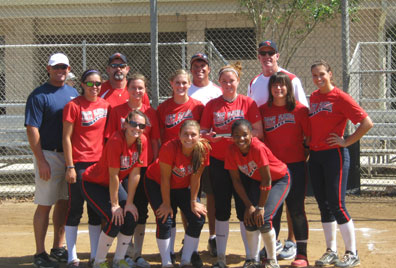 CLEARWATER, Fla. – High Intensity and Team North Florida-Fagan finished a perfect 6-0 at the inaugural NFCA Top Recruit Tournament at the Eddie C. Moore Softball Complex in Clearwater on Sunday to claim the championship in the top bracket of the 16U and 18U divisions, respectively.

High Intensity won their championship by defeating the Miami Stingrays, 5-3. The scoring got started early in the first inning when Jess Ujvari blasted a home run over the fence in left center to give High Intensity a 2-0 lead. High Intensity pushed its lead out to three runs in the third inning off of an RBI-single from Alexis Brunson to score Rachel Dunsford.

However, the Stingrays fought back in the bottom of the frame with a two-RBI triple from Stephanie Texeira that pulled her team within one. Later in the inning, Texeira tied the game when Kelli Kleis plated her on a single to the shortstop.

In the fifth inning, High Intensity capitalized on an error and a wild pitch that allowed Jess Ujvari to score the would-be game-winning run. The scoring was capped at 5-3 later in the inning on a RBI ground-out from Aja Brechtel that scored Lauren Donaldson.

Brechtel struck out four batters over two innings from the circle and picked up the win in the contest, while Christina Ramirez closed out the final two innings by allowing no hits with just one walk and a strikeout to earn the save.

In the 18U bracket, Team North Florida used dynamic hitting and spot-on pitching to capture the crown with a 7-0 victory over Lady Gators-Flannery. North Florida scored three runs in the first, two in the second and capped their day in the sixth with two runs, one off of an error by the Gators and the other courtesy of a bases-loaded walk.

After the game, North Florida head coach Kevin Fagan talked about the win and the tournament as a whole. “The win against a quality team, a Gold qualifying opponent is good. I feel like out pitching was really good. We were missing kids all weekend and then we got them back today and it really made a big difference. I thought it was a great tournament, good experience, good competition, so it was a winner all the way around.”

Other bracket winners on Sunday included the West Pines Diamond Dusters-Schmalz in the 18U Silver bracket, Select-Ritter in the 18U Bronze, the South Florida Mini Bulls-Black in the 18U Copper, Team North-Florida-Whitt in the 16U Blue and the Tampa Mustangs-Ehlers in the 16U Red.