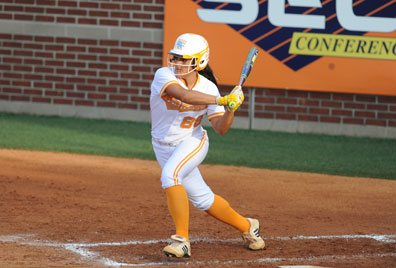 CLEARWATER, Fla. – Three of the four ranked teams participating in the 16th annual NFCA Leadoff Classic suffered at least one loss on Friday, as the event kicked-off in its new home, the Eddie C. Moore Complex in Clearwater Fla. After one full day of play, only No. 17 Louisiana-Lafayette, DePaul and USF were left with undefeated records.

It was DePaul that notched the first upset of the day, knocking off No. 20 Georgia Tech, 4-2. Sophomore Kristen Verdun knocked in the would-be winning runs for the Blue Demons in the third inning when she drilled a two-RBI double into left field. DePaul also won their opener, taking down Massachusetts, 8-0, in five innings.

Not long after DePaul scored its upset, Winthrop got an upset of its own by defeating No. 10 Tennessee, 2-1. The win was extra sweet for Winthrop head coach Mark Cooke, as it represented the 700th win of his career.

Despite the upset, Tennessee bounced back in the next game and upended Georgia Tech, 9-0. Junior Raven Chavanne led the way for the Lady Vols in the contest by going 3-for-4 with a run and a RBI.

Massachusetts also rebounded in big way in its final game of the day by blanking No. 12 Michigan, 1-0. Senior pitcher Sara Plourde was nearly flawless in the contest and allowed just two hits and two walks while striking out 16.

USF and Louisiana-Lafayette also finished the day with unblemished records and have placed themselves in prime position to compete for the tournament title. The 17th-ranked Ragin’ Cajuns opened their weekend in Clearwater with a 6-3 win over Mississippi State and a 5-4 win over Hofstra, while USF topped Illinois, 8-0, in five innings and blanked, Mississippi State, 1-0, in the night cap.

Play in the 2012 NFCA Leadoff Classic will resume tomorrow with a full slate of games that is set to begin at 10:30 a.m. ET.