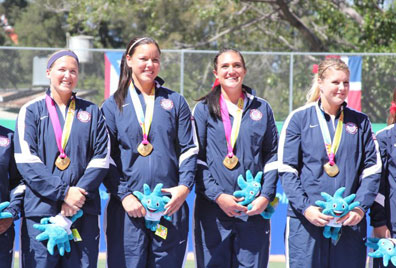 GUADALAJARA, Mexico – With a Pan American Games roster full of 17 rookies, the USA Softball Women’s National team recorded the program’s eighth Pan American Games gold medal with an 11-1 run-rule victory over Canada. In four innings, the U.S. put up 11 hits and completed the tournament with a perfect 9-0 record. As a team, they hit an impressive .428 throughout the week outscoring opponents 78-8. The pitching staff held opponents to a .145 batted average and recorded five shutout victories.

“With this new team we had to go out and find the best people that we could find to make a team, not necessarily the best players,” said head coach Ken Eriksen (Tampa, Fla.) “I know that we have the best 17 that make up a great team. The aspect of change for this program in 2011 was to find the right mix and I feel like we did that pretty well. I congratulate each and every player for a job well done.”

“This is simply just a great feeling to win and represent the United States” said Stacey May-Johnson (Reno, Nev.) May-Johnson finished the tournament hitting .522 with a team leading 12 RBI. In the gold medal game, the third baseman was 2-for-3 with two RBI followed by Molly Johnson (Tucson, Ariz.) who was 2-for-2 with one RBI.

Lefty Keilani Ricketts (San Jose, Calif.) earned her fourth win of the tournament entering in relief in the gold medal game. She tallied a team-leading 22 strikeouts in 16.1 innings pitched over the week with a .43 ERA.

“It was great to come out and win all of our games here,” said Ricketts. “Our defense and offense was working hard every single game and it is a pitchers dream to have that behind you. This gold medal is what we have worked really hard for at the Pan Ams. It is great that all of our hard work all summer has paid off here in Mexico.”

Canada put a runner in scoring position right away in the top of the first inning when Melanie Matthews reached on a walk issued by starting pitcher Jordan Taylor (Valencia, Calif.). A stolen base advanced Matthews before Jen Yee also earned a base on balls. But Taylor shut down the momentum with a strikeout and groundout to head to the dugout.

With two outs in the first, Lauren Gibson (Pasadena, Md.) completely sent a rocket to dead centerfield in the bottom of the first for the 1-0 lead. The home run was the seventh for Team USA in the Pan Ams and a first for Gibson.

Canada came right back at the U.S. in the top of the second inning tying the game 1-1 when Victoria Hayward drove an RBI base hit through the left side scoring Heather Ebert who earlier reached on a walk. With two Canadian runners on and one out, the U.S. called for relief and Ricketts entered the circle. A heads up play by shortstop M. Johnson who threw the ball to catcher Ashley Holcombe (Buford, Ga.) at home plate recorded out No. 2 before Stacy May-Johnson (Reno, Nev.) snagged a ground out to halt the Canadian threat.

Kaitlin Cochran (Yorba Linda, Calif.) was hit by a pitch to start the second inning and moved 60 feet with a stolen base, her second of the week. Jenae Leles (Sacramento, Calif.) then moved her to third with a ground out and Valerie Arioto (Pleasanton, Calif.) drove in the go-head run with an RBI triple for the 2-1 advantage. M. Johnson then roped her first of two hits in the game moving Arioto to home and the solid 3-1 lead.

With bases loaded in the bottom of the third thanks to a Moultrie bunt single, R. Taylor reaching on a Canadian throwing error and an intentional walk to Gibson, May-Johnson made Canada pay connecting on a two RBI line drive single through the left side for the 5-1 difference. The runs kept coming as Leles drove in her eighth hit of the Pan Ams for two RBI and a 7-1 comfortable lead.

The U.S. wasn’t satisfied again in the fourth as they added four more runs for the eventual 11-1 walk-off run rule victory. Pinch runner Taylor Hoagland (Flower Mound, Texas) scored on a throwing error by the Canadian catcher, pinch hitter Christi Orgeron (New Orleans, La.) doubled for an RBI and also scored on a fielder’s choice. Kelly Grieve (Asheville, N.C.) was responsible for the final RBI of the game that sealed the gold medal as she hit the ball hard to left field scoring Gibson for the win.

Canada recorded just three hits in the contest and finished the tournament at 7-3 overall earning the silver medal. Cuba also shared the podium by winning the bronze medal after falling to Canada 4-0 in the morning.

Up next the U.S. will break for the holidays and return in January 2012 for a selection camp for the 2012 World Championship team.