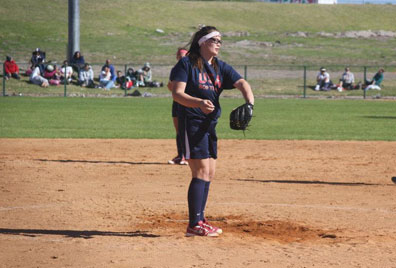 “At that point in the game, the lead that we had was kind of short, it was kind of small so I was just trying to get on base and give ourselves that base runner that would widen the gap again,” Salvarola said. “When I got back up at the end, I was honestly just freezing, really cold and we just wanted to end the game. I was trying really hard to hit the first pitch and end it.”

The action was scheduled to start at 7:30 p.m. but did not get underway until after 9:30, delayed by previous games including the Czech Republic’s 9-8 victory over Puerto Rico. The pool play match-up between Canada and the U.S. ended just short of midnight in Cape Town, with the temperature in the low 50s and winds continuing at nearly 20 MPH.

“I am really proud of how the team performed with the tough weather conditions and the late start,” said Karen Johns (Whippany, N.J.), who is in her second year as head coach of the USA Softball Junior Women’s National Team. “It would have been easy for these young women to get distracted tonight but they fought through the adversity, which is a huge positive. We have to make some improvements if we want to be Junior Women’s World Champions but an 11-4 victory over Canada is not a bad way to start the tournament.”

Team USA headed into the bottom of the fifth holding a two run lead over the Canadians. With Natalie Becker in the circle, the first four USA batters reached base. Salvarola advanced to second on a Hallie Wilson (North Tustin, Calif.) hit then scored on Ally Carda’s (Elk Grove, Calif.) single. Lauren Chamberlain (Trabuco Canyon, Calif.), the 2010 USA Softball Junior Women’s National Team Athlete of the Year, was walked to load the bases.

“I was just looking for a pitch that I could at least put in play,” said Salvarola, who went 2-for-2 with two walks. “I went up there knowing that she wasn’t throwing many pitches for strikes so I was focused on getting a good pitch and putting it in play.”

Dallas Escobedo (Glendale, Ariz.) pitched the first three innings for the win. Of the 11 batters faced by the Arizona State sophomore standout, she allowed two batters to reach base, walking Shannon Davidson and then giving up a single to Natalie Wideman in the second. Escobedo struck out three batters.

“I felt really great warming up and was excited that we were finally playing games,” Escobedo said. “We’ve been out here practicing for about a week now. Finally getting out there and playing against another team really adds fuel to my fire. I was just ready to perform and I think I did well.”

Nyree White (Eugene, Ore.) pitched 1.2 innings, with all four Canadian runs crossing the plate with her in the circle. Only two runs were earned, while another pair came on a sloppy play that started with a throwing error from third baseman Cordes to first baseman Chamberlain. White was relieved in the fifth by Cheyenne Tarango, who faced three batters.

The United States returns to action Friday at 2:30 p.m. local time/6:30 a.m. CT against China. Live stats for all USA Softball games played in Cape Town are available through USASoftball.com