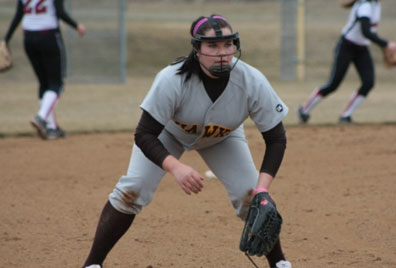 STARKVILLE, Miss. – Freshmen Allie Cranfill of West Texas A&M and Wendy Macias of Quincy have been named as the Louisville Slugger Division II National Player and Pitcher of the Week, respectively, for games played April 9-15.

Cranfill turned in astronomical numbers last week as she helped pace the Lady Buffs to a 7-0 record. The freshman hit .609 with two doubles, four walks, eight home runs, 13 runs and 21 RBIs. She finished the seven-game stretch with a .609 batting average, a .667 on-base percentage and a 1.739 slugging percentage.

The Frisco, Texas native was nearly perfect in her team’s 20-17 slugfest win over Cameron in which she went 4-for-5 with three RBIs. Ironically, that game was the only one of three game series in which Cranfill did not record multiple home runs.

Cranfill is batting .376 in her first collegiate season with team-highs of 19 home runs and 54 RBIs. She is currently third in the nation in home runs and sixth in slugging percentage at .929.

Macias went 2-0 last week with wins over St. Joseph’s (Ind.) and McKendree. Over 14.0 innings of work, the freshman allowed no runs, just three hits and two walks, while striking out 11. She ended the week with a 0.00 ERA and an opponent’s batting average of .067.

In the game against McKendree, Macias tossed the first perfect game of her career while posting five strikeouts. Her two shutouts last week brought her season total up to four and she has now won five games in a row.

Macias in currently 6-3 this season with an ERA of 1.40, 94 strikeouts and an opponent’s batting average of .199. Her ERA is the second best in the Great Lakes Valley Conferences, ranking only behind the 0.96 of Indianapolis’ Jennifer DeMotte.