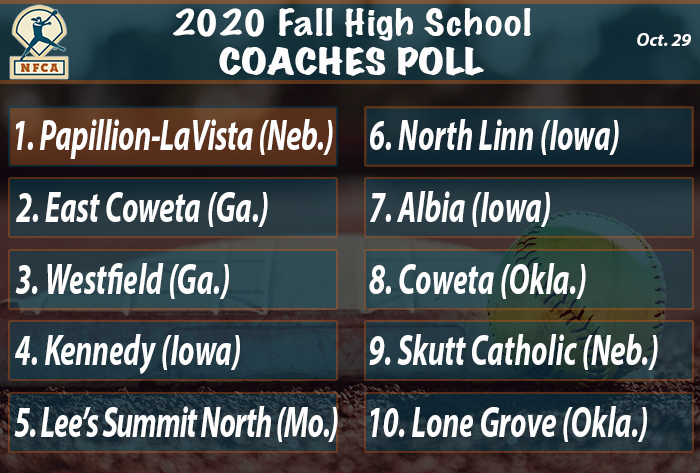 LOUISVILLE, Ky. — One team won a title, one is playing for a title, and two others will square off for the chance to reach the title game, as the 2020 NFCA Fall High School Top 25 Coaches Poll rolls to a close.

Second-ranked East Coweta (33-1) swept North Forsyth on Tuesday in its best-of-three playoff series to advance to its 15th Georgia High School Association state final four in the last 16 seasons. The Indians will seek to continue their quest for a third state title in the last four seasons when they face No. 15 Harrison in the 7A semifinals Friday at the South Commons Complex in Columbus, Ga.

Staff ace Jaliyah Holmes improved to 20-0 for the season in a 5-3 win over the Raiders, and Kylie Ferguson allowed just three hits in a 14-2 five-inning rout in the game-two rematch. Kaliyah Matthews powered the East Coweta offense by going 6-for-6 with three homers in the two contests, which gave her a school-record 17 homers for the season.

As a team, East Coweta has 55 homers, which broke last year’s season mark. North Forsyth had knocked out reigning state titlist Mountain View in the second round of the playoffs.

Meanwhile, Harrison (28-4) shook off a series-opening 7-0 loss to Etowah on Tuesday to win the final two games later Tuesday, 6-5, and Wednesday, 4-2, and join East Coweta in Columbus, where the Hoyas have won two state crowns and been runner-up four times.

No. 3 Westfield (24-2) wrapped up its season last Saturday with a shutout sweep of John Milledge Academy in the best-of-three Georgia Independent School Association Class AAA championship series, winning 5-0 and 12-0.

In Missouri, fifth-ranked Lee’s Summit North (28-3) defeated Park Hill, 11-5, last Thursday and Kickapoo, 2-0, on Saturday to reach its first Class 5 final, where the Broncos will face unbeaten Rock Bridge (28-0). The game had been slated for Thursday, but was moved to Friday due to unplayable conditions at the Killian Softball Complex in Springfield, Mo.

University of Washington commit Kinsey Fiedler went 2-for-3 with a homer and four RBI for Lee’s Summit North in the win over Park Hill, while Cierra Harrison pitched a three-hit shutout to fuel the Broncos’ triumph over Kickapoo.