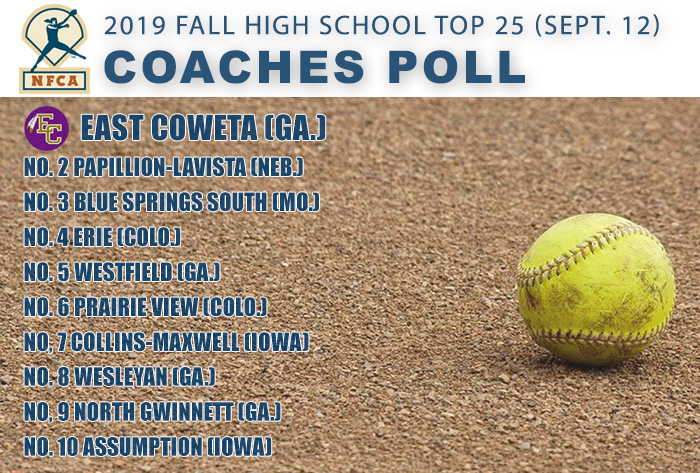 After Wednesday’s 13-1 rout of South Paulding, the two-time defending Class 7A state champion Indians are now 14-0 this season and 82-2 over the last two-plus seasons. They’ll put their unbeaten record on the line later today at Northgate.

Meanwhile, Nebraska’s Papillion-LaVista (16-0) won five games to take over the No. 2 spot, as Sequoyah lost twice at the Silo Tournament to drop all the way to 16th, below a bunch of teams that went unbeaten, including fellow Oklahoma school Kiowa (20-2).

Missouri Class 4 state champion Blue Springs South (8-0) is the new No. 3 squad, as it kicked its season into full swing with a seven-win week, which included scoring 26 runs over its last three contests.

At No. 13, Roff (17-1) is one of two newcomers to the rankings this week, having continued its stellar play with a 2-1 victory at Red Oak, the second-ranked team in Oklahoma’s Class B. Nebraska’s Gretna (12-3) is the other fresh face in the poll at No. 24.