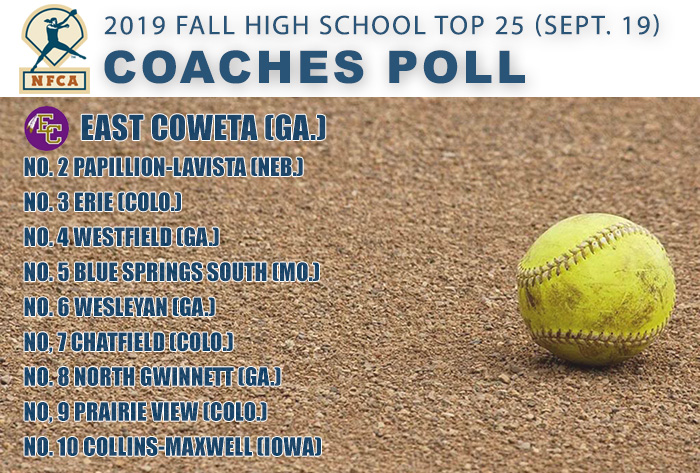 LOUISVILLE, Ky. — Lots of jostling in this week’s NFCA Fall High School Top 25 Coaches Poll, just not at the top, as East Coweta won three more games to remain at No. 1 for a fourth straight week.

The two-time defending Class 7A state champion (17-0) Indians rolled to lopsided wins over Northgate, Wheeler and Alexander by a combined score of 33-2, and are now 85-2 over the last two-plus seasons. They’ll put their unbeaten record on the line tomorrow against Northside in the Ram Classic at Walnut Grove High.

Nebraska’s Papillion-LaVista (21-0) won all five of its games to remain solidly in the No. 2 spot, while fellow unbeatens Erie (13-0) of Colorado and Georgia’s Westfield (14-0) both jumped ahead of Blue Springs South (9-1), who lost a heartbreaker, 8-7, to Park Hill on Tuesday.

Elsewhere, Wesleyan (21-0) stayed perfect and gained two places — to sixth — with a five-win week, while undefeated Chatfield (16-0) broke into the poll at No. 7, and North Gwinnett (19-1) scored three wins to move up to eighth. Prairie View’s first loss dropped the (12-1) Thunderhawks to ninth, and Collins-Maxwell (27-1), who ended its season as Iowa’s Class 1A state titlist, maintained a place the top 10.

Oklahoma’s Tuttle (24-2) is the other newcomer this week at No. 21, while Nebraska’s Gretna and Colorado’s Legacy dropped out.