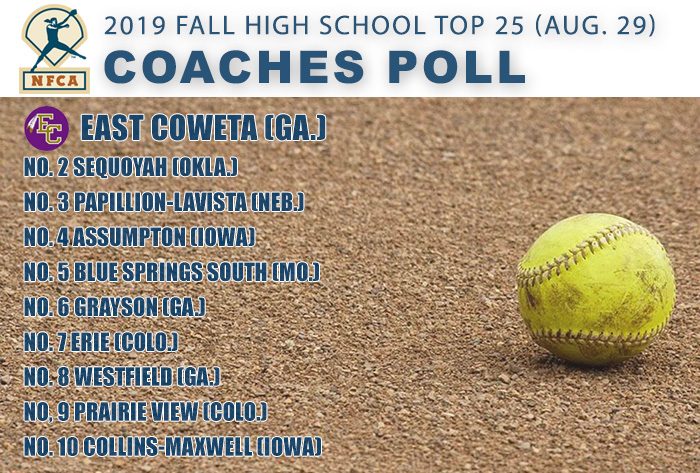 The two-time defending Class 7A state champion Indians edged Starr’s Mill, 3-2, and beat Hampton, 5-3, before fending off Whitewater, 4-3, to run their season record to 12-0. Over the last two-plus seasons, East Coweta is now a remarkable 80-2.

Meanwhile, Oklahoma’s Sequoyah (9-0) and Nebraska’s Papillion-LaVista (6-0) are also perfect this fall, in the second and third spots, respectively, ahead of No. 4 Assumption (26-1), which beat Louisa-Muscatine, 7-4, on July 26 to capture the Iowa Girls High School Athletic Union Class 3A state title.

Defending Missouri Class 4 state champion Blue Springs South is ranked fifth heading into its season opener on Friday, while the rest of the top 10 teams have just one loss between them, with 24-1 Iowa Class 3A titlist Collins-Maxwell rounding out that group.