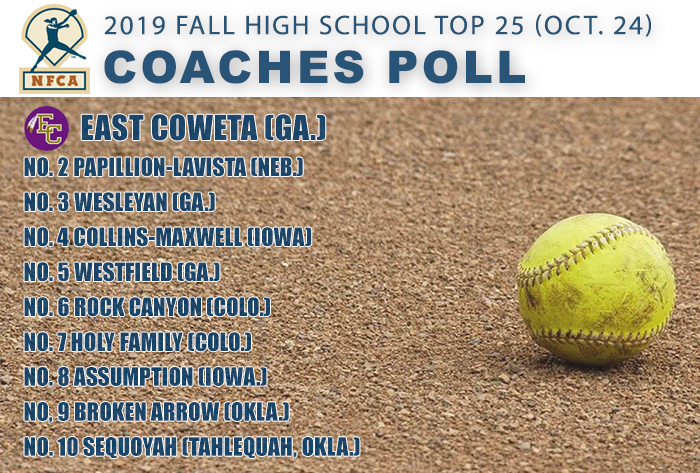 Top-ranked, two-time defending state champion East Coweta (32-0) remains No. 1 for a ninth straight week, and returns to action in the Georgia state Class 7A final four starting today at the South Commons Complex in Columbus, Ga.

No. 2 Papillion-LaVista (36-0) kept pace again this week by winning the Nebraska Class A championship for the second time in the last three years. The Monarchs completed their unbeaten season with a pair of victories over 11th–ranked Elkhorn — 8-0 in last Thursday’s semis, and 15-2 in Friday’s final — has now been in the state final five consecutive years.

Elkhorn (30-5) had moved up to Class A following its B state championship last season.

The only change in the rankings this week came toward the bottom, as fellow Nebraska schools Beatrice (32-6) and Skutt Catholic (29-4) swapped places at No. 23 and 24. Beatrice, who lost to Elkhorn in last year’s Class B state final, beat Wayne, 1-0, in this year’s semis, but lost both the rematch and the winner-take-all championship game with the Blue Devils, 6-1 and 5-3, respectively, to close out its season. Skutt Catholic, meanwhile, was eliminated from the state Class B tournament with a 4-2 loss to Seward.

In the only other action involving ranked teams, Missouri’s Raymore-Peculiar (23-5) won all three of its games to maintain its spot at No. 25.

After a snowstorm on Wednesday in Colorado, teams are hoping state tournament games scheduled for Friday and Saturday at Aurora Sports Park are not affected. Officials have already said games will be pushed back as needed until they can be played, and said delays of several hours could occur before utilizing the next available day.