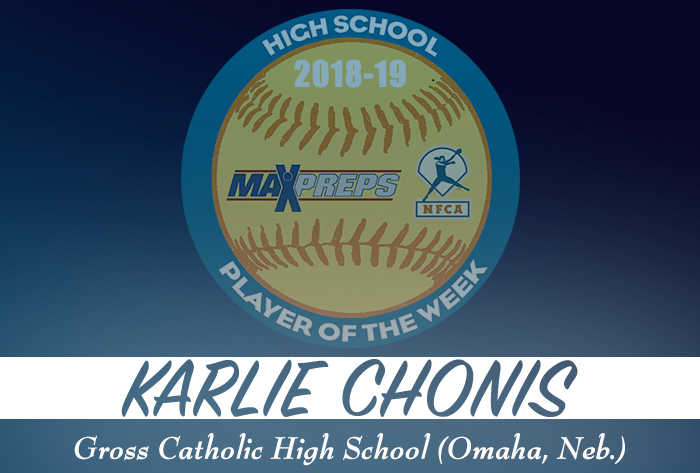 LOUISVILLE, Ky. – Karlie Chonis of Gross Catholic High School (Bellevue, Neb.) was named MaxPreps/NFCA National High School Player of the Week for her outstanding play during the week of Oct. 1-7.

Over a four-game stretch, Chonis hit .833 (10-for-12) with four home runs, 13 RBI and a 2.000 slugging percentage, leading the Cougars to four wins and improving their record to 17-10. In the 9-2 win over Nebraska City, she went 4-for-4 with a triple, homer and six RBI. Chonis clubbed two long balls, drove in three runs and scored twice during a 6-2 triumph against Plattsmouth. The junior capped off the week with her fourth home run, two more RBI and two runs in an 8-7 win over Norris. Additionally, she was flawless defensively, recording a 1.000 fielding percentage in 28 chances.